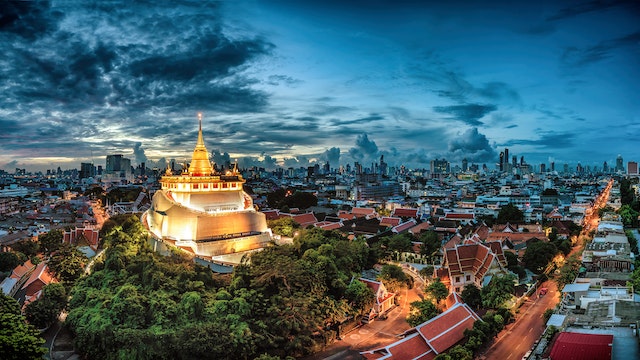 Even if you're wát-ed out, you should tackle the brisk ascent to the Golden Mount. Serpentine steps wind through an artificial hill shaded by gnarled trees, some of which are signed in English, and past graves and pictures of wealthy benefactors. At the peak, you'll find a breezy 360-degree view of Bangkok's most photogenic side.

Before glass and steel towers began growing out of Bangkok’s flat riverine plain, the massive Golden Mount was the only structure to make any significant impression on the horizon. The mount was commissioned by Rama III (King Phranangklao; r 1824–51), who ordered that the earth dug out to create Bangkok’s expanding klorng (canal) network be piled up to build a 100m-high, 500m-wide chedi (stupa).

As the hill grew, however, the weight became too much for the soft soil beneath and the project was abandoned until his successor built a small gilded chedi on its crest and added trees to stave off erosion. Rama V (King Chulalongkorn; r 1868–1910) later added to the structure and interred a Buddha relic taken from India (given to him by the British government) in the chedi. The concrete walls were added during WWII to prevent the hill from eroding.

Next door, seemingly peaceful Wat Saket contains murals that are among both the most beautiful and the goriest in the country; proceed directly to the pillar behind the Buddha statue for explicit depictions of Buddhist hell.

Located on Phu Khao Thong, just off Th Boriphat, the Golden Mount is open daily from 7:30am-5:30pm. Climbing the summit costs 50B for foreigners. Entry for Thais is free.

There is no dress code for the Golden Mount, but visitors should still consider wearing culturally appropriate clothing as it is still seen as a holy Buddhist site. This means trousers or long skirts and tops that cover your shoulders.