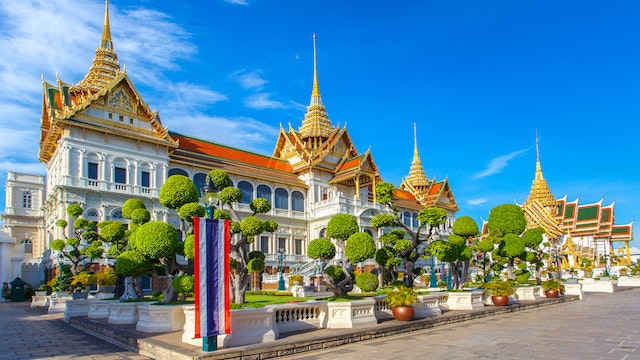 The Grand Palace (Phra Borom Maharatchawang) is a former royal residence in Bangkok that was consecrated in 1782. Today, it’s only used on ceremonial occasions, but it remains the city's biggest tourist attraction and a pilgrimage destination for devout Buddhists.

As part of the greater complex that also encompasses the hallowed Wat Phra Kaew (the Temple of the Emerald Buddha), the 94.5-hectare grounds encompass more than 100 buildings that represent 200 years of royal history and architectural experimentation.

Most of the architecture, royal or sacred, is classified as Ratanakosin (old-Bangkok style). Visitors are allowed to survey the Grand Palace grounds and four of the remaining palace buildings, which are interesting for their royal bombast.

Give yourself between two-to-three hours to explore the sight completely, or an hour longer if you take a guided tour.

The largest palace building open to the public is the triple-winged Chakri Mahaprasat (Grand Palace Hall). Completed in 1882 following a plan by Singapore-based British architect John Clunish, the exterior shows a peculiar blend of Italian Renaissance and traditional Thai architecture.

It's a style often referred to as fa·ràng sài chá-dah (Westerner wearing a Thai classical dancer’s headdress), because each wing is topped by a mon·dòp (a layered, heavily ornamented spire). It is believed the original plan called for the palace to be topped with a dome, but Rama V (King Chulalongkorn; r 1868–1910) was persuaded to go for a Thai-style roof instead. That decision has been interpreted as a subversive thumbing of the nose to the foreign colonialists in Asia at the time. Many believe the king was literally showing Thai dominance over European culture by crowing his Western-inspired palace hall with a Thai-style roof.

The tallest of the mon·dòp, in the centre, contains the ashes of Chakri dynasty kings; the flanking mon·dòp enshrine the ashes of the many Chakri princes who failed to inherit the throne. The last building to the west is the Ratanakosin-style Dusit Hall, which initially served as a venue for royal audiences and later as a royal funerary hall.

At the eastern end of the palace complex, Borombhiman Hall is a French-inspired structure that served as a residence for Rama VI (King Vajiravudh; r 1910–25). Today it can only be viewed through its iron gates. Amarindra Hall, to the west, was originally a hall of justice but is used (very rarely indeed) for coronation ceremonies.

Until Rama VI decided one wife was enough for any man, even a king, Thai kings housed their huge harems in the inner palace area (not open to the public), which was guarded by combat-trained female sentries. The intrigue and rituals that occurred within the walls of this cloistered community live on in the fictionalised epic Four Reigns, by Kukrit Pramoj, which follows a young girl named Phloi growing up within the Royal City.

The Grand Palace complex was established in 1782 after King Rama I ascended to the throne. It is believed that he moved the royal court from Thonburi on the west bank of Chao Phraya River to Bangkok on the east for protection. The river would then act as a moat for the northern, southern and western perimeters, whilst eastern edge of the city – a muddy delta at the time – would be difficult for attackers to cross without being seen or hampered.

The royal residences were moved out of the Grand Palace during the reign of King Vajiravudh, leaving Chakri Mahaprasat (Grand Palace Hall) to fall into disrepair. In 1932, Rama VII (King Prajadhipok; r 1925-1935) called for a major renovation of the hall, but the project ran out of money, and the back section of the building had to be demolished.

The Grand Palace was also where Rama VIII (King Ananda Mahidol; r 1935–46) was mysteriously killed in 1946. He was found dead in his bed with a gunshot wound to his head.

In April 1981, the deputy commander of the Thai army, General San Chitpatima, used the palace as his headquarters for an attempted coup against the Prime Minister Prem Tinsulanond. The coup was unsuccessful.

In October of 2017, the Grand Palace complex and adjacent Sanam Luang served as the setting for the funeral of King Rama IX – possibly one of the most ornate funerals in modern history. The ceremony took a year to plan, saw the construction of a nearly 50m-high gilded pyre, cost a total of US$90 million, and was attended by tens of thousands of mourners dressed in black.

The current king, Rama X, had his coronation held in the large Amarindra Hall in 2019. Following the ceremony, the king carried on the Budtan Thong royal palanquin from the the hall’s throne room to the Wat Phra Kaew.

Does the Grand Palace have a dress code?

As with many of Bangkok’s sights, you will need culturally appropriate attire to enter the Grand Palace. This means being well covered. Visitors should wear long skirts/trousers and sleeved shirts—basically anything that covers more than the lower arms and head.

Sleeveless shirts, vests, short or see-through tops are all prohibited, as are shorts and three-quarter length pants/skirts. Visitors won’t be able to enter if they’re wearing torn or skinny trousers, cycling shorts or miniskirts either.

Those who aren’t dressed appropriately at the entrance can expect to be shown into a dressing room and issued with a sarong before being allowed in – this adds to queuing and unnecessary delays.

There are no restrictions as to what footwear you wear in the palace, but do note that you will be asked to remove your shoes to enter some of the buildings.

The Grand Palace is open daily from 8.30am-3.30pm. Enter the Grand Palace complex through the clearly marked third gate from the river pier. Tickets are purchased inside the complex and cost 500B. They also give you access to Wat Phra Kaew and Queen Sirikit Museum, which are both part of the complex. Thai people get in free.

Tickets can also be bought in advance via the Royal Grand Palace website. Guides can be hired at the ticket kiosk and audio guides can be rented for 200B.

The grounds and gardens are wheelchair accessible and there are accessible toilets onsite too.

Travel a century back in time by booking one of the nine rooms in Asadang, a beautiful antique shophouse located in Chinatown. Rooms not particularly huge, but are big on atmosphere and come equipped with both antique furnishings and modern amenities.

Located in a former school, the 42 rooms at Feung Nakorn Balcony surround an inviting garden courtyard and are generally large, bright and cheery. The charming hotel has a quiet and secluded location away from the main road.

Right in the heart of the hipster Tien village area, the rooms at Arom D are united by a cutesy design theme and a host of inviting communal areas, including a rooftop deck, computers and a ground-floor cafe.

Cap off your visit to the Grand Palace with lunch at Ming Lee, a charmingly old-school Thai restaurant located virtually across the street from the complex's main entrance.

Navy Club is the restaurant of the Royal Navy Association and it has one of the few coveted riverfront locations along this stretch of the Chao Phraya River. Locals come for the combination of views and cheap and tasty seafood-based eats – not for the cafeteria-like atmosphere.

Alternatively, enjoy a Thai-themed cocktail and a spicy drinking snack at Err.