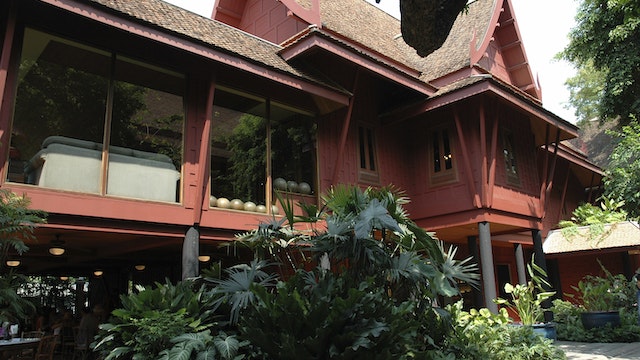 This jungly compound is the former home of the eponymous American silk entrepreneur and art collector. Born in Delaware in 1906, Thompson briefly served in the Office of Strategic Services (the forerunner of the CIA) in Thailand during WWII. He settled in Bangkok after the war, when his neighbours’ handmade silk caught his eye and piqued his business sense. He sent samples to fashion houses in Milan, London and Paris, gradually building a steady worldwide clientele.

In addition to textiles, Thompson also collected parts of various derelict Thai homes and had them reassembled in their current location in 1959. Some of the homes were brought from the old capital of Ayuthaya; others were pulled down and floated across the klorng (canal; also spelt khlong) from Baan Khrua, including the first building you enter on the tour. One striking departure from tradition is the way each wall has its exterior side facing the house’s interior, thus exposing the wall’s bracing system. His small but splendid Asian art collection and his personal belongings are also on display in the main house.

Thompson’s story doesn’t end with his informal reign as Bangkok’s best-adapted foreigner, however. While out for an afternoon walk in the Cameron Highlands of western Malaysia in 1967, Thompson mysteriously disappeared. That same year his sister was murdered in the USA, fuelling various conspiracy theories. Was it communist spies? Business rivals? Or a hungry tiger? Although the mystery has never been solved, evidence revealed by American journalist Joshua Kurlantzick in his profile of Thompson, The Ideal Man, suggests that the vocal anti-American stance Thompson took later in his life may have made him a potential target of suppression by the CIA.

Beware of well-dressed touts in soi (lanes) near the Thompson house who will tell you it is closed and try to haul you off on a dodgy buying spree.