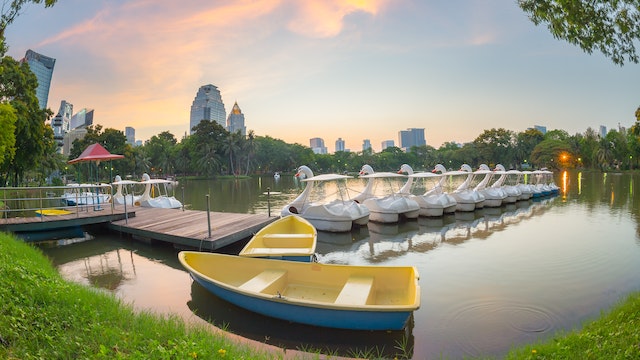 The park was originally a royal reserve but in 1925 Rama VI (King Vajiravudh; r 1910–25) declared it a public space. A statue of the founding emperor can be found at the southwestern entrance of the park.

One of the best times to visit is early morning (or late evening), when the air is relatively fresh (or pleasantly balmy) and legions of Thai-Chinese are practising t’ai chi, or doing their best to mimic the aerobics instructor, or doing the half-run half-walk version of jogging that makes a lot of sense in oppressive humidity. There are paddleboats for lovers, playgrounds for the kids and ramshackle gym weightlifting areas.

This Chinese-style clock tower, located in the southeastern corner of Lumphini, doubles as an interesting photographic subject amidst the park's greenery. It was built for the Siamrath Phipitthapan Trade Fair in 1925 and was designed by Italian architect Mario Tamagno.

Cold drinks are available at the entrances and street-food vendors set up tables outside the park’s northwest corner from about 5pm. Be aware that late at night the borders of the park are a popular spot for sex workers and clientele.