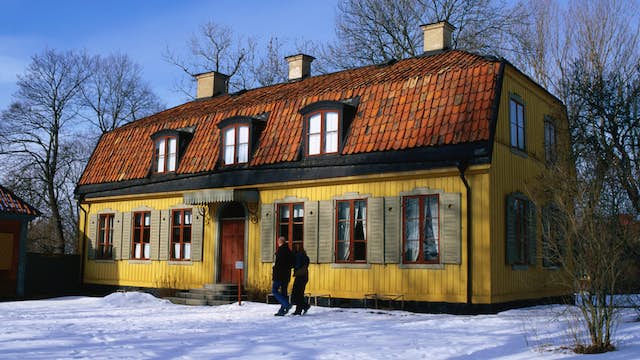 Often called 'Sweden in miniature', Skansen is an unmissable Stockholm highlight. Expect to spend a full day wandering this hilltop open-air museum, with stops at traditional workshops such as the glassblowers' hut and the rustic bakery, photo ops on top of a gigantic painted wooden Dala horse and a visit to the Nordic zoo, where you can see bears, wolves and moose in their natural surroundings.

It's a fun way to learn about the traditional ways of life throughout Swedish history. There are plenty of places to stop for refreshments, both in the park itself and just outside its boundaries on the museum-heavy island of Djurgården.

The world’s first open-air museum, Skansen was founded in 1891 by Swedish teacher and folklorist Artur Hazelius, who became interested in regional folklore while traveling the country researching a dictionary. He wanted to help preserve vanishing traditions and provide an insight into how Swedes once lived. Around 150 traditional houses and other exhibits dot the hilltop, including whole villages, garden plots, and examples from the worlds of commerce and industry.

Many of these buildings were rescued from far-flung places around the country. Part of the pharmacy was moved here from Drottningholm castle and two little garden huts came from Tantolunden in Södermalm.

Skansen is known as a mini-Sweden, but even so, there’s plenty of ground to cover – you could easily spend a day here and not see it all. Grab a map and make a beeline for the areas that interest you the most.

The glass-blowers’ cottage is a popular stop; watching the intricate forms emerge from glowing blobs of liquid glass is transfixing. It has limited hours, so check when you get there so you don’t miss the day’s demonstrations.

The Nordic Zoo, with elk, reindeer, brown bears, wolves and other native wildlife, is a major highlight, especially in spring when baby critters scamper around.

Many of the buildings in the open-air museum, representing various trades and areas of the country, house cheerful staff in period costume. You can stroll up and ask questions as they make crafts, play music or churn butter using the methods of the folk whose lives they’re recreating. There’s a bakery (still operational, serving coffee and excellent pastries), a bank/post office, a machine shop, botanical gardens and Hazelius’ mansion. There are also 46 traditional buildings that were brought in from rural areas around Sweden, including a Sami camp, farmsteads from several regions, a manor house and a school.

The Skansen Aquarium (separate admission) is worth a wander and has over 200 residents including crocodiles, scorpions, lemurs and pygmy marmosets (the smallest, and arguably cutest, monkeys in the world).

Djurgården has some especially nice outdoor cafes in summer, as well as loads of places to picnic. For something a little more formal, look to Wärdshuset Ulla Winbladh, in a villa from the 1897 World’s Fair.