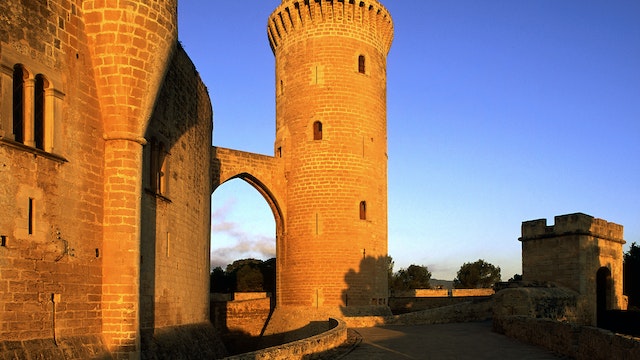 Straddling a wooded hillside, the Castell de Bellver is a 14th-century circular castle (with a unique round tower), the only one of its kind in Spain. Jaume II ordered it built atop a hill known as Puig de Sa Mesquida in 1300 and it was largely completed within 10 years. Perhaps the highlight of any visit is the spectacular views over the woods to Palma, the Badia de Palma and out to sea.

The castle was conceived above all as a royal residence but seems to have been a white elephant, as only King Sanç (in 1314) and Aragón’s Joan I (in 1395) moved in for any amount of time. In 1717 it became a military prison, and was subsequently used in both the Napoleonic and Spanish Civil Wars. Climb to the roof and check out the prisoners’ graffiti, etched into the stonework.

The ground-floor Museu d’Història de la Ciutat (City History Museum) traces the development of the city from the prehistoric Talayotic civilisation to the present day. As well as Roman and Arabian ceramics there are explanatory panels, the classical statues of the Despuig Collection and other artefacts. Upstairs you can visit a series of largely empty chambers, including the one-time kitchen.

About the nearest you can get to the castle by bus (3, 46 or 50) is Plaça de Gomila, from where you’ll have to walk for about 15 minutes (1km) up a steep hill. Instead, combine it with the Palma City Sightseeing open-top bus, which climbs to the castle as part of its circuit of the city. Alternatively, if you have a car, there is parking available.

There is a small cafe available for refreshments.