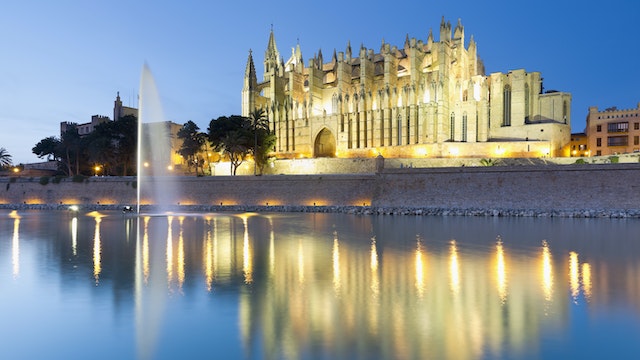 Palma’s vast cathedral ('La Seu' in Catalan) is the city's major architectural landmark. Aside from its sheer scale, treasures and undoubted beauty, its stunning interior features, designed by Antoni Gaudí and renowned contemporary artist Miquel Barceló, make this unlike any cathedral elsewhere in the world. The awesome structure is predominantly Gothic, apart from the main facade, which is startling, quite beautiful and completely mongrel. The stunning rose window is the largest in Europe, see it up close by visiting the roof terraces.

The Catedral occupies the site of what was the central mosque of Medina Mayurka, capital of Muslim Mallorca for three centuries. Although Jaume I and his marauding men forced their way into the city in 1229, work on the Catedral – one of Europe’s largest – did not begin until 1300. Rather, the mosque was used in the interim as a church and dedicated to the Virgin Mary. Work wasn’t completed until 1601.

The original was a Renaissance cherry on the Gothic cake, but an earthquake in 1851 (which caused considerable panic but no loss of life) severely damaged it. Rather than mend the original, it was decided to add some neo-Gothic flavour. With its interlaced flying buttresses on each flank and soaring pinnacles, it's a masterful example of the style. The result is a hybrid of the Renaissance original (in particular the main doorway) and an inevitably artificial-feeling, 19th-century pseudo-Gothic monumentalism.

For an additional €4, visitors can enjoy the cathedral's roof terraces which includes the bell tower, buttresses and corridor between the two main towers, all affording magnificent views of the city and sea. Note that there are around 280 steps and no available lift. The one-hour visits are guided at set times and must be booked in advance as numbers are limited.

Mass times vary, but one always takes place at 9am Monday to Saturday.