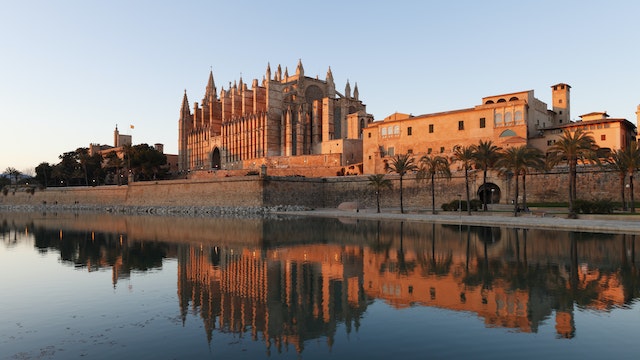 Originally an Islamic fort, this mighty construction opposite the cathedral was converted into a residence for the Mallorcan monarchs at the end of the 13th century. The King of Spain resides here still, at least symbolically. The royal family is rarely in residence, except for the occasional ceremony, as they prefer to spend summer in the Palau Marivent (in Cala Major). At other times you can wander through a series of cavernous stone-walled rooms that have been lavishly decorated.

The Romans are said to have built a castrum (fort) here, possibly on the site of a prehistoric settlement. The Wālis (Governors) of Muslim Mallorca altered and expanded the Roman original to build their own alcázar (fort), before Jaume I and his successors modified it to such an extent that little of the alcázar remains.

The first narrow room you enter has a black-and-white Mudéjar ceiling, symbolising the extremes of night and day, darkness and light (and only discovered during restoration in 1967). You then enter a series of three grand rooms. Notice the bricked-in Gothic arches cut off in the middle. Originally these three rooms were double their present height and formed one single great hall added to the original Arab fort and known as the Saló del Tinell (from an Italian word, tinello, meaning ‘place where one eats’): this was once a giant banqueting and ceremonial hall. The rooms are graced by period furniture, tapestries and other curios. The following six bare rooms and terrace belonged to the original Arab citadel.

In the main courtyard, Patio de Armas, troops would line up for an inspection and parade before heading out into the city. The 11th century lion fountain here is one of the palace’s rare Arab remnants. Up the grand Royal Staircase are the royal apartments, a succession of lavishly appointed rooms (look up to the beautiful coffered timber artesonado ceilings). Next door to the apartments is the royal Capella de Sant’Anna, a Gothic chapel whose entrance is a very rare Mallorcan example of late Romanesque in rose and white marble.

After the death of Jaume III in 1349, no king lived here permanently again.

In the shadow of the Almudaina’s walls, along Avinguda d’Antoni Maura, is S’Hort del Rei (the King’s Garden).