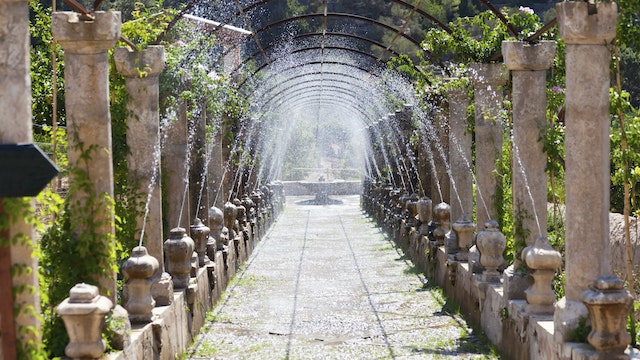 The Jardins de Alfàbia reside in the shadow of the rugged Serra d’Alfàbia mountain range stretching east of Sóller. Here an endearingly faded finca with a baroque facade, which looks like it was stripped from a Florentine basilica, is surrounded by gardens, citrus groves, palm trees and a handful of farmyard animals. The murmur of water gurgling along irrigation canals hints at the place’s past as the residence of an Arab Wāli (viceroy).

Little remains of the original Arab house, except for the extraordinary polychromatic coffered ceiling, fashioned from pine and ilex, immediately inside the building’s entrance. It is bordered by inscriptions in Arabic and is thought to have been made around 1170. To the right of the inner courtyard is the tafona (large oil press), a mix of Gothic, Renaissance and baroque styles. The rambling house is laden with period furniture and a 1200-volume library. Within the library is the original Llibre de les Franqueses (Book of Franchise), written by King Jaume I as the basis for all rights in Mallorca after the Christian conquest.