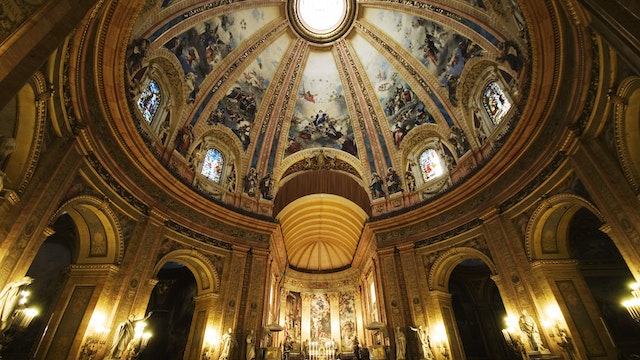 Crowning Madrid’s oldest neighborhood of La Latina is an architectural and visual masterpiece that is the Basílica de San Francisco el Grande (Basilica of Saint Francis the Great) — as much a place of Catholic worship as it is a temple paying homage to Spanish art. Its several marble and gold inlaid chapels and sacristy are home to an impressive collection of paintings by Spanish masters, the most famous of which is Francisco Goya’s St. Bernardino of Siena preaching to Alfonso V of Aragon. With a diameter of 33 meters and height of 58 meters, the Basilica’s great dome is the largest in Spain and the fourth largest in Europe, after those of Saint Peter’s Basilica and the Pantheon in Rome, and the Santa Maria del Fiore in Florence.

This treasured Spanish heritage has been through multiple incarnations, the earliest of which goes back to the 13th century. Legend has it that when Saint Francis of Assissi passed by Spain on his pilgrimage to the tomb of the St. James the Apostle in Compostela in 1214, he built a modest home for himself and his companions near a hermitage where the church stands today.

From these humble beginnings, the structure was expanded and enriched over the years, and eventually exceeded the splendor of all the churches in Madrid, until it was completely demolished in 1760 in order to build an ever bigger and more beautiful church to replace it.

The ambitious work was then assigned to a Franciscan monk, Fray Francisco Cabezas, who had envisioned a dome covering a circular temple housing several chapels. He worked on it for seven years until the project was suspended because of a disagreement over the proposed plan for the dome. Years later, under the rule of King Carlos III, construction recommenced under the guidance of the famed Italian architect Francesco Sabatini (who likewise designed Madrid’s Puerta de Alcalá and oversaw the reconstruction of the Plaza Mayor). The royal church was finally consecrated on 1784, and nearly two centuries later in 1963, was officially conferred the status of Basilica Minor by Pope John XXIII.

Once you step through the doors of the Basilica, it is impossible to not be awestruck by its floor-to-ceiling opulence and assembly of art under one dome. Underneath a celestial scene of frescoes and stained glass windows with biblical motifs, guarded by sculptures of the apostles and prophets, trompe-l’œil paintings of saints, and carved cherubim, are six chapels embracing a main altar. Each of these chapels have a different theme and is a mini museum unto itself, featuring altars surrounded by large oil paintings depicting religious scenes, mosaics, and intricately carved moldings. While the Basilica’s predominant architectural style is NeoClassical, these lavishly decorated chapels showcase different distinct periods, from Baroque to Byzantine, Renaissance to Rococo.

The Chapel of St. Bernardino of Siena, one of the chapels situated on the left side of the Basilica, features Goya’s famous St. Bernardino of Siena preaching to Alfonso V of Aragon, which was commissioned in 1781. As selfies were non-existent at that time, Goya managed to incorporate the closest thing — his self-portrait on the right-hand side of the painting (he’s the one dressed in yellow).

While visiting the main church area is free during morning Mass hours, it is certainly worth paying for a ticket (5 euros, from Tuesday to Friday) to access the museum in the inner sacristy. These hallowed halls exhibit 49 large paintings depicting scenes from the life of Saint Francis of Assisi, by renowned Spanish artists such as Alonso Cano, Francisco Zurbarán, Antonio González Velazquez, José Moreno Carbonero, among others. It is no less opulent inside — the hefty carved seats, mahogany and oakwood floors, gold candelabras and ornate ceilings could make you pause and wonder just how far the church has come from its humble origins.

One room of interest is the ante-sacristy, a red-painted sanctum bordered by 17th century walnut-carved benches with Plateresque style backs. Six mirrors framed in gold gilded pinewood actually serve a purpose — when you stand in front of them, they perfectly reflect the central medallion painted on the ceiling, The Triumph of the Church, so you don’t need to strain your neck!

A guided tour in Spanish is offered during these times and is included in the ticket price.

The Basílica de San Francisco el Grande is conveniently located in the southwestern corner of the historic La Latina barrio. If you happen to find yourself here on a Sunday, you could also catch the 400-year old flea market, El Rastro, or take part in a favorite local pastime — a Sunday tapas crawl along the cobblestone streets, in particular Cava Baja, long after the sun sets.