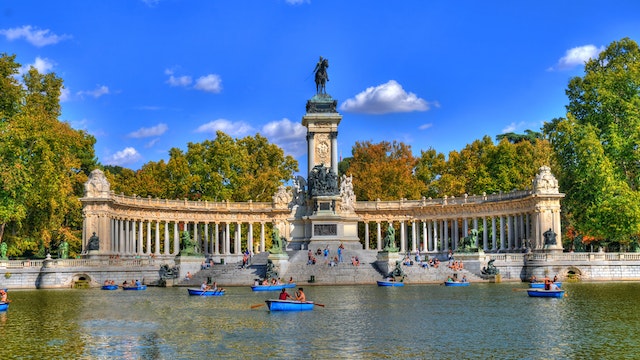 Madrid’s emblematic park, known locally as El Retiro, was the exclusive reserve of Spanish royalty until it was opened to the public in the late 19th century. Now everyone can enjoy the ornate fountains, statues of Spanish writers and heroes, gazebos and stylistic exhibition spaces found in this sprawling, 292-acre (118-hectare) green space.

True to its name, which means 'retirement' or 'rest', many Madrileños while away the day here either relaxing on the grass or sitting in one of the many terrazas (open-air cafés), far from the bustle of the city. A walk through the park reveals various landscaping styles, from French-inspired manicured lawns to craggy tree-lined pathways and romantic rose gardens.

Among the grounds are several landmarks including Monument to Alfonso XII, a grand colonnade overlooking a central lake, and The Fallen Angel, the world's only publicly commissioned statue of Lucifer. Madrid's oldest tree, planted in 1633, can also be found here.

Created during the reign of Felipe IV in the 17th century, Parque del Buen Retiro was originally situated next to the Jerónimos Monastery. Only the Jerónimos Church still survives.

An expansive palace complex, the Palacio del Buen Retiro, once stood to one side of the park before it was destroyed by a fire in the 18th century. In 1868, the garden was opened to the public as a municipal heritage park, which it remains today.

During the War of Independence (1808-1814), Parque del Buen Retiro was transformed into a fortress and barracks for Napoleon’s troops, which led to the destruction of large swathes of the park.

Until 1972, the park had a zoo on its ground called the Casa de Fieras (House of Wild Animals). It housed animals brought back from Spanish colonies, including leopards, hyenas, polar bears and elephants. Sadly, many of the animals perished when Madrid was bombed during the Spanish Civil War in 1936.

The focal point of El Retiro is the massive monument to King Alfonso XII, which surrounds the estanque (artificial lake) on the east side of the park. King Alfonso XII was a much-loved monarch who ruled from 1875 to 1885 and died young at 28. The equestrian statue honoring him was made by  Spanish sculptor Mariano Benlliure. On Sunday afternoons, it’s not uncommon for crowds to gather at the foot of the monument and dance to bongo drums. You can also rent rowboats from the lake’s northern shore.

On the southern end of the lake is a curious structure decorated with sphinxes called the Fuente Egipcia. Legend has it that an enormous fortune of Felipe IV was buried here in the mid-18th century.

Unarguably the park’s most famous statue is the El Angel Caído (The Fallen Angel), believed to be the only artistic statue in the world depicting Lucifer. It dramatically depicts the Morning Star as a winged youth in agony at his fall from grace, entangled by a seven-headed serpent pulling him to hell. It is mounted on a fountain that shoots streams of water from gargoyle heads. To add some fuel to the hellfire — the statue stands at 666 meters above sea level.

The ruins of the Ermita de San Pelayo y San Isidro, located in the northeastern corner of the park, is a small country chapel. It is noted as one of the few, albeit modest, examples of Romanesque architecture in Madrid. All that remains of the 13th-century structure is part of the wall, a side entrance and some of the apse. They were restored in 1999.

Hidden among verdant trees is the Palacio de Cristal (Glass Palace), an architectural marvel of iron and glass, reflected magnificently on the waters of a surrounding lake. It was built in 1887 to house flora brought over from the Philippines, then a Spanish colony. Today, it serves as an exhibition space.

The oldest tree in Madrid

Just within the Puerta de Felipe IV, the monumental gateway into the Parterre formal gardens, is thought to be Madrid's oldest tree. The Mexican conifer was planted in 1633 during the construction of the former Retiro Palace.

Towards the southern end of the park is the La Rosaleda Garden, a romantic little enclave with over 4000 roses. They are in full bloom from May to June.

Parque del Buen Retiro is located near several of Madrid’s major sights including the Puerta de Alcalá, the gate that was once the main entrance to the city, and the iconic Plaza de la Cibeles.  Madrid’s "golden triangle" of art museums – Museo del Prado, Reina Sofía and Thyssen-Bornemisza – are also nearby; all three are on Paseo del Prado boulevard.