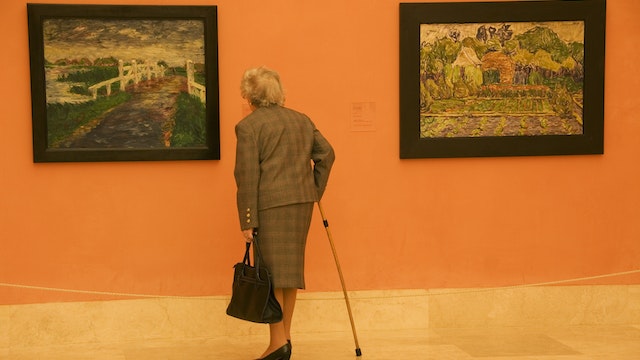 The Thyssen-Bornemisza Museum is one of the three points composing Madrid’s Golden Triangle of Art along the Paseo del Prado (Art Walk), together with the Museo del Prado and the Reina Sofía. Once a privately owned art collection started by the Baron Heinrich Thyssen-Bornemisza, and later on expanded by his son Baron Hans Heinrich Thyssen-Bornemisza, the Thyssen is home to a magnificent collection of nearly 1,000 paintings from several of the world’s most celebrated artists, from Dalí to Degas, Rembrandt to Renoir, and van Eyck to Van Gogh among several others. While the Prado and Reina Sofía’s massive size allows you to delve into the life’s work of a particular artist, which could take days to fully explore, the Thyssen’s relatively compact size offers visitors with limited time the memorable experience of immersing in a wide and varied range of artistic styles and periods from the 13th to the 20th century.

History of the Thyssen-Bornemisza Museum

The story of how the Thyssen family’s prized art collection moved from an aristocrat’s private gallery housed in Switzerland to the Spanish capital is a curious one that spans three generations.

The Thyssen Museum’s earliest pieces could be traced to the seven sculptural groups of Auguste Rodin, which were commissioned by August Thyssen — the German industrialist and founder of the steel and iron Thyssen empire in the late 19th century. After his death, his third son Heinrich continued the family tradition of collecting art, acquiring major pieces in the 1920s. Heinrich had gained noble status after marrying the daughter of the Hungarian Baron Gabor Bornemisza de Kászon, Margit, and later adopted the surname Thyssen-Bornemisza. Between 1933 and 1935, Heinrich added many pieces to the collection, including Jan van Eyck’s “The Annunciation” and Caravaggio’s “Saint Catherine of Alexandria.” As his collection grew, he bought the palace of Villa Favorita in Lugano, Switzerland, to build an art gallery where he could privately exhibit his collection to guests.

Upon Heinrich’s death in 1947, his treasured art collection went to his youngest son, the Baron Hans Heinrich. He further expanded his father’s collection to include avant-garde styles and modern art, and eventually opened the Villa Favorita gallery to the public. Wishing to preserve his collection, the Baron explored the possibility of expanding Villa Favorita in a foreign location. Subsequently, he received multiple offers from several German cities, the Getty Foundation, and the Spanish government. Owing to the influence of his Spanish wife, Carmen Cervera, the Baron eventually took his collection to Spain and loaned 775 works to the Spanish state in 1988. In June 1993, these were sold to the Spanish state for 350 million dollars.

Baron Hans Heinrich bequeathed most of his paintings to Carmen Cervera, who continues to lend these paintings to the museum as part of the Carmen Thyssen-Bornemisza collection.

A good way to explore the Thyssen’s treasures is to do it chronologically, by starting on the top (second) floor and working your way down. The second floor showcases medieval art, including 13th and 14th century Italian, German and Flemish religious paintings and triptychs. Room 11 features masterpieces by El Greco and his Venetian contemporaries Tintoretto and Titian, while Room 14 and 15 display paintings by mid-century Spanish masters Zurbarán and Murillo. Aficionados of Dutch and Flemish art would not want to miss Rooms 19 to 21, which showcase works from Rembrandt, Rubens and van Dyck.

The top-floor highlights are Rooms A to H, which showcase the impressive collection of Carmen Thyssen-Bornemisza, including masterpieces from Boudin, Canaletto, Courbet, Fragonard, Matisse, Picasso and Renoir, among several others.

The museum's first floor is home to an exquisite assembly of 19th-century French Impressionist and Post-Impressionist paintings by Cézanne, Degas, Gauguin, Pissarro Toulouse-Lautrec and Van Gogh.

Finally, the Thyssen’s ground floor is a toast to contemporary 20th-century art, with works from Cubist and Surrealist masters, including Picasso, Braque, Juan Gris, Paul Klee, Max Ernst, Joan Miró, Chagall and Salvador Dalí. Here is also where you can gaze at celebrated pop art and expressionist paintings from Lichtenstein and Jackson Pollock, a highly charged contrast to the medieval religious-inspired art at the start of your tour.

One curated way to experience the Thyssen’s collection, especially if you don’t have too much time to explore all its rooms, is taking a thematic tour marked by special routes according to specific themes such as food, wine, fashion or love and sensuality.

It’s not hard to understand why the Thyssen has embraced the motto, “Everyone’s Museum” — its layout is quite the opposite of the stuffy museum stereotype. There’s a vibrant, open and friendly atmosphere enlivened by regular open-air concerts, temporary exhibitions, educational programs for the youth, as well as free entry on Monday afternoons.

After an enriching day of art appreciation, the Thyssen’s lobby and open-air terraces by the courtyard and garden are a welcoming setting for guests to enjoy cocktails and art-soaked conversations.

It is highly recommended that you book tickets in advance, especially during weekends when the museum gets packed. Full access tickets (EUR13) and tickets with an audio guide (EUR18) can be reserved online on the Thyssen website. The museum offers free entry on Mondays all year round from 12:00nn to 4:00pm.