in El Retiro & the Art Museums 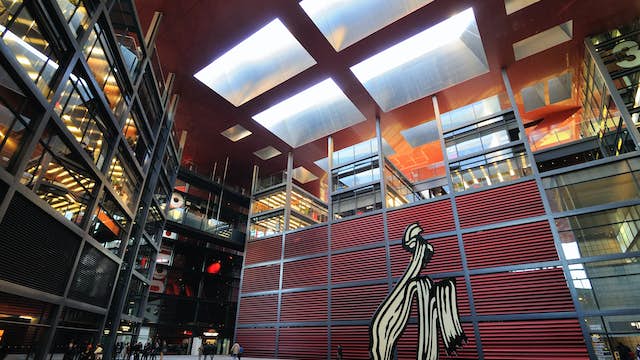 Home to Picasso’s Guernica, arguably Spain’s most famous artwork, the Centro de Arte Reina Sofía is Madrid’s premier collection of contemporary art. In addition to plenty of paintings by Picasso, other major drawcards are works by Salvador Dalí and Joan Miró. The collection principally spans the 20th century up to the 1980s. The occasional non-Spanish artist makes an appearance (including Francis Bacon’s Lying Figure; 1966), but most of the collection is strictly peninsular. Tickets are cheaper if purchased online.

The permanent collection is displayed on the 2nd and 4th floors of the main wing of the museum, the Edificio Sabatini. Guernica’s location never changes – you’ll find it in Room 206 on the 2nd floor. Beyond that, the location of specific paintings can be a little confusing. The museum follows a theme-based approach, which ensures that you'll find works by Picasso or Miró, for example, spread across the two floors. The only solution if you’re looking for something specific is to pick up the latest copy of the Planos de Museo (Museum Floorplans) from the information desk just outside the main entrance; it lists the rooms in which each artist appears (although not individual paintings).

In addition to Picasso’s Guernica, which is worth the admission fee on its own, don’t neglect the artist’s preparatory sketches in the rooms surrounding Room 206; they offer an intriguing insight into the development of this seminal work. If Picasso’s cubist style has captured your imagination, the work of the Madrid-born Juan Gris (1887–1927) or Georges Braque (1882–1963) may appeal.

The work of Joan Miró (1893–1983) is defined by often delightfully bright primary colours, but watch out also for a handful of his equally odd sculptures. Since his paintings became a symbol of the Barcelona Olympics in 1992, his work has begun to receive the international acclaim it so richly deserves – the museum is a fine place to see a representative sample of his innovative work.

The Reina Sofía is also home to 20 or so canvases by Salvador Dalí (1904–89), of which the most famous is perhaps the surrealist extravaganza that is El gran masturbador (1929). Among his other works is a strange bust of a certain Joelle, which Dalí created with his friend Man Ray (1890–1976). Another well-known surrealist painter, Max Ernst (1891–1976), is also worth tracking down.

If you can tear yourself away from the big names, the Reina Sofía offers a terrific opportunity to learn more about sometimes lesser-known 20th-century Spanish artists. Among these are Miquel Barceló (b 1957); madrileño artist José Gutiérrez Solana (1886–1945); the renowned Basque painter Ignazio Zuloaga (1870–1945); Benjamín Palencia (1894–1980), whose paintings capture the turbulence of Spain in the 1930s; Barcelona painter Antoni Tàpies (1923–2012); pop artist Eduardo Arroyo (1937–2018); and abstract painters such as Eusebio Sempere (1923–85) and members of the Equipo 57 group (founded in 1957 by a group of Spanish artists in exile in Paris), such as Pablo Palazuelo (1916–2007). Better known as a poet and playwright, Federico García Lorca (1898–1936) is represented by a number of his sketches.