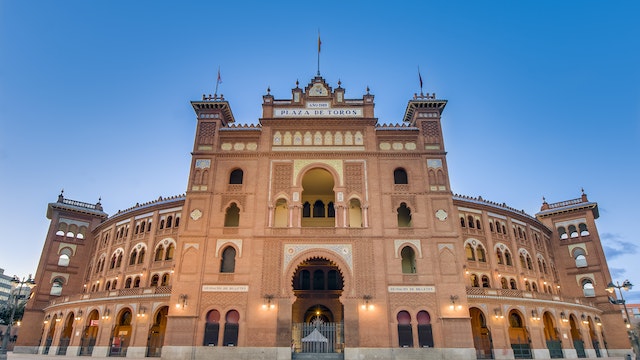 One of Spain’s most atmospheric arenas, the Plaza de Toros Las Ventas has hosted everything from Beatles concerts to motocross competitions during its eight-decade history. But it is the controversial sport of bullfighting for which the stadium was built and is best known for, with aficionados of the activity hailing it as Spain’s “Bullfighting Cathedral”.

Located east of central Madrid, the Plaza de Toros features a wide public square with a bullfighting ring constructed in the Mudéjar (Moorish) style. Its coliseum-like arena can seat a little over 23,000 people, making it the largest bullring in Spain and one of the largest in the world. Bullfights regularly take place here during the season, which runs from mid-May to September, while daily fights occur during the week-long San Isidro festival, held each May. A visit to the Museo Taurino (Bullfighting Museum) at the back of the bullring offers a comprehensive look at the history and evolution of this divisive Spanish tradition.

History of the Plaza de Toros

Known officially as the Plaza de Toros de Ventas del Espíritu Santo, the arena is simply referred to as “Las Ventas” because the area upon which it stands used to be an enclave of several wayside taverns, known as “ventas” in Spanish.

The stadium was built in 1929 and officially inaugurated in 1931 with a charity bullfight. However, the area surrounding the plaza remained a shanty town. A mass clean up operation, coupled with the outbreak of the Spanish Civil War in 1936, meant that the Plaza de Toros was officially re-inaugurated in 1939, a decade after its initial construction.

Apart from the annual roster of bullfights during the season, the Plaza de Toros has also hosted opera performances, weddings, traveling circuses, car shows and rock concerts – this is where the Beatles held their first concert in Spain when they came to Madrid in 1965. Other high-profile artists who have performed here include Prince, Sting and B.B. King.

Highlights of the Plaza de Toros

Certainly not bereft of hyperbole, the main entrance of the bullring that features a grand Moorish arch is called “The Doorway to Eternal Glory.” To be carried through here, high on the shoulders of aficionados, is the ultimate dream of any young torero (bullfighter).

Outside the arena are several statues paying tribute to important figures in the Spanish bullfighting world. Right by the main entrance are the monuments of two bullfighters, Antonio Bienvenida, a celebrated torero during his heyday in the 1970s, and José “El Yiyo” Cubero, a beloved matador who was only 21 when he was gored by a bull through the heart.

Curiously, standing alongside these icons of the bullfighting world, is a bronze bust of Scottish doctor Alexander Fleming. Fleming’s discovery of the antibiotic penicillin helped save the lives of many bullfighters who suffered deep wounds after being stabbed by bull horns. Consequently, in 1964, bullfighters collected money to erect a monument in Dr Fleming’s honor. The monument includes a statue depicting Fleming, and a matador tipping his hat to the scientist in appreciation of his work.

Inside, the plaza’s bullring is divided into ten tendidos (sections), radiating from the sandy central ring. The rather uncomfortable stone seats are distinguished in price according to the amount of sunlight each gets, with the most expensive seats being in the sombra (shade), the cheapest under the sol (sun) and the midrange ones in the sol y sombra, or partial shade. The most diehard bullfighting aficionados sit in Tendido 7, under the sun.

Situated at the back of the arena in the “Patio de Caballos” is the Bullfighting Museum, which is dedicated to the history and culture of bullfighting. Three large rooms exhibit fancy bullfighting dresses, accessories, busts and portraits of famous bulls and toreros, as well as the original posters advertising historic fights.

In the Trajes de Luces (Costumes of Lights) section, you’ll see the walking capes of well-loved bullfighters, such as the pink and gold ensemble worn by Manolete, one of the most famous matadors of all time, who died in the ring in 1947.

Some other features to watch out for in the museum include a series of bullfighting-themed etchings (“La Tauromaquia”) by Spanish romantic painter Francisco Goya, as well as a framed copy of a – aptly named – papal bull (public decree) issued by Pope Pius V, in 1567, that forbade Catholics from participating in bullfights on punishment of excommunication, and prohibiting a Christian burial to anyone killed in a bullfight.

Guided visits (in English and Spanish) will take you out onto the sand and into the royal box. Tours must be booked in advance through Las Ventas Tour. Access to the Museo Taurino is free of charge.