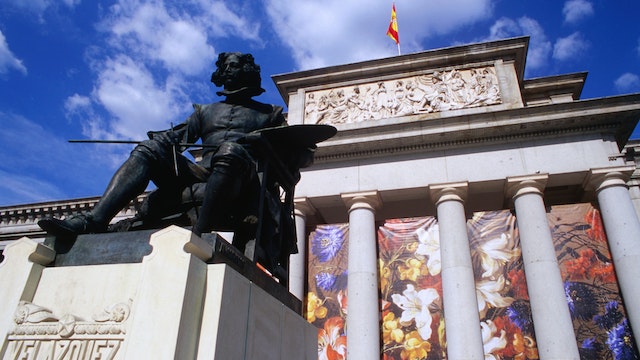 Welcome to one of the world's premier art galleries. More than 7000 paintings are held in the Museo del Prado’s collection (of which only around 1500 are currently on display), acting like a window onto the historical vagaries of the Spanish soul, at once grand and imperious in the royal paintings of Velázquez, darkly tumultuous in Pinturas negras (Black Paintings) of Goya, and outward looking with sophisticated works of art from all across Europe.

Spend as long as you can at the Prado or, better still, plan to make a couple of visits because it can be a little overwhelming if you try to absorb it all at once.

Entrance to the Prado is via the eastern Puerta de los Jerónimos, with tickets on sale beneath the northern Puerta de Goya. Once inside, pick up the free plan from the ticket office or information desk just inside the entrance – it lists the locations of 50 of the Prado’s most famous works and gives room numbers for all major artists.

The western wing of the Prado (Edificio Villanueva) was completed in 1785, as the neoclassical Palacio de Villanueva. Originally conceived as a house of science, it later served, somewhat ignominiously, as a cavalry barracks for Napoleon’s troops during their occupation of Madrid between 1808 and 1813. In 1814 King Fernando VII decided to use the palace as a museum, although his purpose was more about finding a way of storing the hundreds of royal paintings gathering dust than any high-minded civic ideals – this was an era where art was a royal preserve. Five years later the Museo del Prado opened with 311 Spanish paintings on display.

Francisco José de Goya y Lucientes (Goya) is found on all three floors of the Prado, but we recommend starting at the southern end of the ground or lower level. In Rooms 64 and 65, Goya’s El dos de mayo and El tres de mayo rank among Madrid’s most emblematic paintings; they bring to life the 1808 anti-French revolt and subsequent execution of insurgents in Madrid. Alongside, in Rooms 66 and 67, are some of his darkest and most disturbing works, Pinturas negras; they are so called in part because of the dark browns and black that dominate, but more for the distorted animalesque appearance of their characters.

There are more Goyas on the 1st floor in Rooms 34 to 37. Among them are two more of Goya’s best-known and most intriguing oils: La maja vestida and La maja desnuda. These portraits, in Room 37, of an unknown woman, commonly believed to be the Duquesa de Alba (who may have been Goya’s lover), are identical save for the lack of clothing in the latter. There are further Goyas on the top floor.

Diego Rodriguez de Silva y Velázquez (Velázquez) is another of the grand masters of Spanish art who brings so much distinction to the Prado. Of all his works, Las meninas (Room 12) is what most people come to see. Completed in 1656, it is more properly known as La família de Felipe IV (The Family of Felipe IV). The rooms surrounding Las meninas contain more fine works by Velázquez: watch in particular for his paintings of various members of royalty who seem to spring off the canvas – Felipe II, Felipe IV, Margarita de Austria (a younger version of whom features in Las meninas), El Príncipe Baltasar Carlos and Isabel de Francia – on horseback.

Having experienced the essence of the Prado, you’re now free to select from the astonishingly diverse works that remain. If Spanish painters have piqued your curiosity, Bartolomé Esteban Murillo, José de Ribera and the stark figures of Francisco de Zurbarán should be on your itinerary. The vivid, almost surreal works by the 16th-century master and adopted Spaniard El Greco, whose figures are characteristically slender and tortured, are also perfectly executed.

Another alternative is the Prado’s outstanding collection of Flemish art. The fulsome figures and bulbous cherubs of Peter Paul Rubens (1577–1640) provide a playful antidote to the darkness of many of the other Flemish artists. His signature works are Las tres gracias (The Three Graces) and Adoración de los reyes magos. Other fine works in the vicinity include The Triumph of Death by Pieter Bruegel, Rembrandt’s Artemisa, and those by Anton Van Dyck. And on no account miss the weird and wonderful The Garden of Earthly Delights (Room 56A) by Hieronymus Bosch (c 1450–1516). No one has yet been able to provide a definitive explanation for this hallucinatory work, although many have tried.

And then there are the paintings by Dürer, Rafael, Tiziano (Titian), Tintoretto, Sorolla, Gainsborough, Fra Angelico, Tiepolo…

In contrast to the original Edificio Villanueva, the eastern wing (Edificio Jerónimos) is part of the Prado’s stunning modern extension, which opened in 2007. Dedicated to temporary exhibitions (usually to display Prado masterpieces held in storage for decades for lack of wall space), and home to the excellent bookshop and cafe, its main attraction is the 2nd-floor cloisters. Built in 1672 with local granite, the cloisters were until recently attached to the adjacent Iglesia de San Jerónimo El Real, but were in a parlous state. As part of their controversial incorporation into the Prado, they were painstakingly dismantled, restored and reassembled.