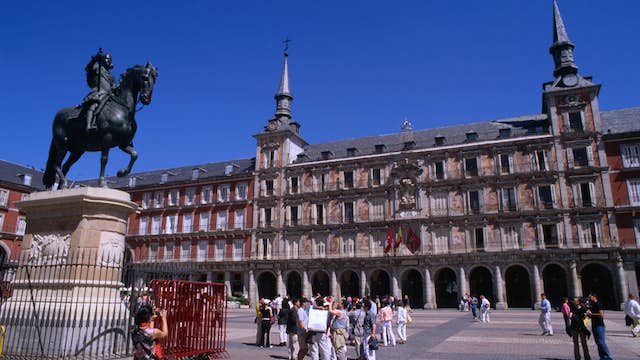 Madrid's grand central square, a rare but expansive opening in the tightly packed streets of central Madrid, is one of the prettiest open spaces in Spain, a winning combination of imposing architecture, picaresque historical tales and vibrant street life. At once beautiful in its own right and a reference point for so many Madrid days, it also hosts the city's main tourist office, a Christmas market in December and arches leading to laneways out into the labyrinth.

Ah, the history the plaza has seen! Designed in 1619 by Juan Gómez de Mora and built in typical Herrerian style, of which the slate spires are the most obvious expression, its first public ceremony was suitably auspicious – the beatification of San Isidro Labrador (St Isidore the Farm Labourer), Madrid’s patron saint. Thereafter it was as if all that was controversial about Spain took place in this square. Bullfights, often in celebration of royal weddings or births, with royalty watching on from the balconies and up to 50,000 people crammed into the plaza, were a recurring theme until 1878. Far more notorious were the autos-da-fé (the ritual condemnations of heretics during the Spanish Inquisition), followed by executions – burnings at the stake and deaths by garrotte on the northern side of the square, hangings to the south. These continued until 1790 when a fire largely destroyed the square, which was subsequently reproduced under the supervision of Juan de Villanueva, who lent his name to the building that now houses the Museo del Prado. These days, the plaza is an epicentre of Madrid life.

The grandeur of the plaza is due in large part to the warm colours of the uniformly ochre apartments, with 237 wrought-iron balconies offset by the exquisite frescoes of the 17th-century Real Casa de la Panadería. The present frescoes date to just 1992 and are the work of artist Carlos Franco, who chose images from the signs of the zodiac and gods (eg Cybele) to provide a stunning backdrop for the square. The frescoes were inaugurated to coincide with Madrid’s 1992 spell as the European Capital of Culture.