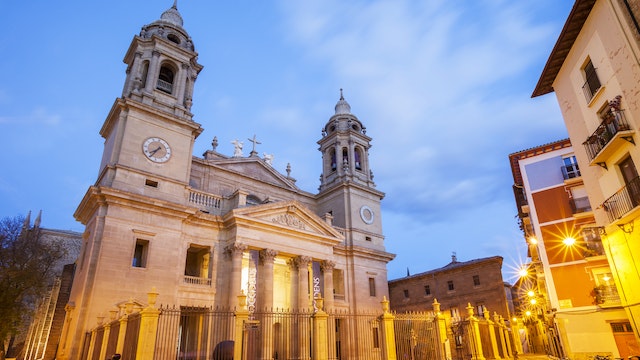 Pamplona’s cathedral stands on a rise just inside the city ramparts amid a dark thicket of narrow streets. The cathedral is a late-medieval Gothic gem with an an 18th-century neoclassical facade. Artefacts in the vast interior include a silver-plated Virgin and the splendid 15th-century tomb of Carlos III of Navarra and his wife Doña Leonor. The real joy is the Gothic cloister with delicate stonework. Admission includes a guided tour (English available with advance notice).

Fascinating tours take you into the cathedral and, if you're on the 11.15am tour, up the bell tower to see (and possibly hear) the second-largest church bell in Spain. You also visit the cloisters and a small museum, which displays religious treasures, the remaining walls of a Roman-era house discovered under the cathedral during restoration work and the tiny skeleton of a seven-month-old baby found inside the house. The cathedral itself is open daily for free access outside the stated hours, but you can’t access the cloisters or museum.