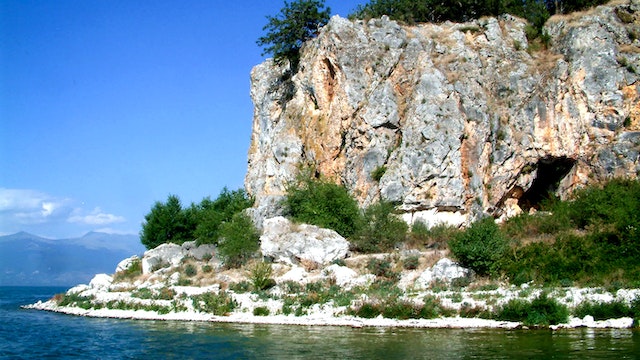 Adrift on Lake Prespa, Golem Grad was once the king's summer playground but is now home to wild tortoises, cormorants and pelicans, and perhaps a few ghosts. A settlement endured here from the 4th century BC to the 6th century AD and during medieval times there was a monastery complex. The ruins, birdlife and otherworldly beauty make it well worth exploring. Vila Raskrsnica or Dzani Dimovski (070 678 123), who owns the cafe at Dupeni Beach, organise trips.

The island is part of the Galičica National Park, though it's easier to access from the eastern side of Lake Prespa, near Pelister National Park. Ongoing excavations have unearthed dozens of ruins, many of which have been marked out for visitors with information boards (in English). The battered church of St Peter, which dates to the 14th century and bears remnants of frescoes, is the closest historic structure to the boat docking area and just a short way along the marked path. After that, you'll find the remaining stumps of a Roman house, the overgrown foundations of a couple of early Christian basilicas dating to the 5th and 6th centuries, and an impressive waterside ruin of a 4th-century Roman cistern (though the last is a little off the marked track).

Golem Grad is only 750m long and 450m wide, so very walkable. If you felt like it, you could even camp out here overnight. The boat trip is worth doing in itself, as the sight of the pelicans in the water and on the shore as you approach the island is magical. Note that the shoreline is backed by high rocks and cliffs 20m to 30m high, so it's not much of a swimming spot – particularly as it's also home to a high concentration of (harmless) water snakes. Its nickname is 'snake island'; wear hiking boots as there are also some poisonous land snakes to watch out for.

Dzani Dimovski is a reliable boat driver – though he doesn't speak much English. An hour or so on the island and return boat transfers from Dupeni Beach costs €65 for up to three to four people. The boat driver will happily lead you ashore and through the island, or you can explore alone – note that the walking trail markers do occasionally become a little hard to follow.