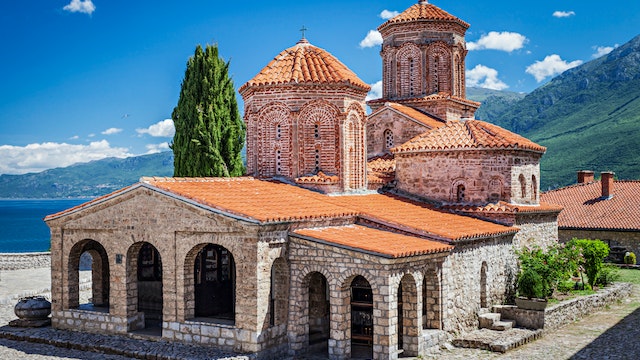 Sveti Naum, 29km south of Ohrid, is an imposing sight on a bluff near the Albanian border and a popular day trip from Ohrid. Naum was a contemporary of St Kliment, and their monastery an educational centre. The iconostasis inside the church dates to 1711 and the frescoes to the 19th century; it's well worth paying the fee to enter. Sandy beaches hem the monastery in on two sides and are some of the best places to swim around Lake Ohrid.

Naum's Church of the Holy Archangels (AD 900) was destroyed by the Ottomans in the 15th century and reincarnated as the Church of Sveti Naum when it was rebuilt between the 16th and 17th centuries as a multidomed, Byzantine-style structure on this cliff. Inside, drop an ear to the tomb of Sveti Naum to hear his muffled heartbeat. Then head to the monastery walls for inspiring lake views.

Surrounding the core of the complex is a tranquil garden looped by fountains, with roses and peacocks. Plan to spend half a day here and enjoy the site, stopping for a paddle and lunch or drinks at one of the handful of restaurants and bars outside the main complex. Boat trips to the Springs of St Naum are also worthwhile, and there's even a good hotel.

If you come by car, you have to pay for parking at the entrance to the monastery. From Ohrid town harbour, boats run to Sveti Naum (€10 return) every day at 10am, returning at 4pm, and it's 1½ hours each way; taxis take half an hour and cost €16 one way or €32 return, and for that price the driver will stop at the Bay of Bones as well. There's also a bus from Ohrid, which runs six to seven times daily (110MKD to 150MKD), stopping at the bus station and running along Bul Turtsticka.