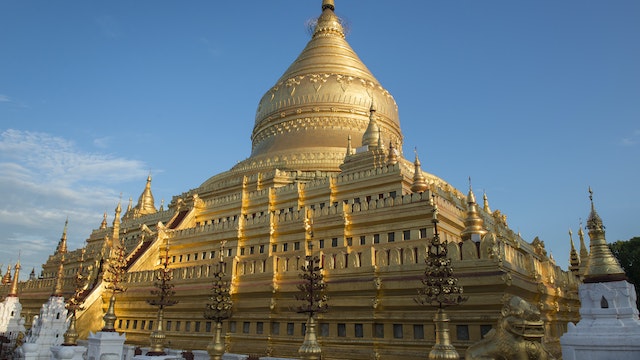 At the western end of Nyaung U, this big, beautiful zedi (stupa) is the town’s main religious site, and is most famous for its link with Myanmar's main nat (spirit beings). Lit up impressively at dusk, the gilded zedi sits on three rising terraces. Enamelled plaques in panels around the base illustrate scenes from the Jataka (stories from the Buddha's past lives).

At the cardinal points, facing the terrace stairways, are four shrines, each housing a 13ft-high bronze standing buddha. Gupta-inspired and cast in 1102, these are Bagan’s largest surviving bronze buddhas.

A 4in circular indentation in a stone slab lying before the upwards-heading eastern steps was filled with water to allow former Myanmar monarchs to look at the reflection of the hti without tipping their heads backwards (which might have caused them to lose their crowns).

The most important site here is the small yellow compound called 37 Nat (in English) on the southeastern side of the site. Inside are figures of the 37 pre-Buddhist nat that were officially endorsed by the Bamar monarchy as a compromise towards a public reluctant to give up all their beliefs for Buddhism. Ask around if the compound is locked. At one end (behind a locked gate) stands an original teak figure of Thagyamin, king of the nat and a direct appropriation of the Hindu god Indra. This is the oldest-known freestanding Thagyamin figure in Myanmar.

The site was started by Anawrahta but not completed until the reign of Kyanzittha. The latter is thought to have built his palace nearby.

A path on the northern side leads down to the riverbank (though you'll pass some dispiriting trash mounds on the way), where you can get some interesting views.