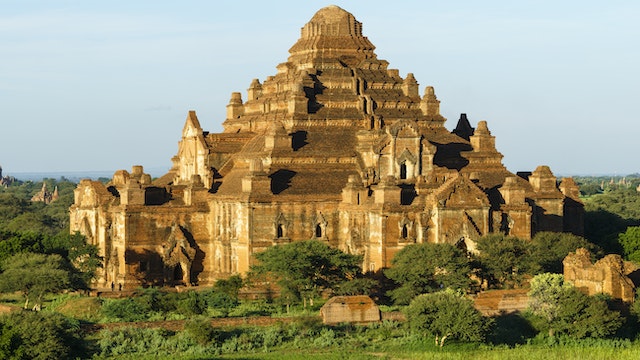 Visible from all parts of Bagan, this massive, walled, 12th-century temple – about 1600ft east of Shwesandaw – is infamous for its mysterious, bricked-up inner passageways and cruel history. It’s said that King Narathu built the temple to atone for his sins: he smothered his father and brother to death and executed one of his wives, an Indian princess, for practising Hindu rituals. The best-preserved of Bagan's temples, it features detailed mortar work in its upper levels.

Narathu is also said to have mandated that the mortar-less brickwork fit together so tightly that even a pin couldn’t pass between any two bricks. Workers who failed in this task had their arms chopped off (which is a little ironic seeing as the temple was being constructed to atone for his past sins). Just inside the west entrance, note the stones with arm-sized grooves where these amputations allegedly happened.

After Narathu died – by assassination in 1170 – the inner encircling ambulatory was filled with brick rubble as ‘payback’. Others quietly argue that the temple dates from the earlier reign of Alaungsithu, which would refute this legend. It’s also likely that this bricking up of the passages was a crude way of ensuring the massive structure didn’t collapse.

The plan here is similar to that of Ananda Pahto, with projecting porticoes and receding terraces, though its sikhara (corn-cob-like temple finial) is reduced to a stub nowadays. Walking around the outer ambulatory, under ceilings so high you can only hear the squeaks of bats circling in the dark, you can see some intact stucco reliefs and paintings, suggesting that the work had been completed. The mystery goes on.

Three out of the four buddha sanctums were also filled with bricks. The remaining western shrine features two original side-by-side images of Gautama and Maitreya, the historical and future Buddhas (it’s the only Bagan site with two side-by-side buddhas).

The temple’s bad karma may be the reason it remains one of the few temples not to have undergone major restoration. Perhaps in time one of the great architectural mysteries of Bagan will be solved.