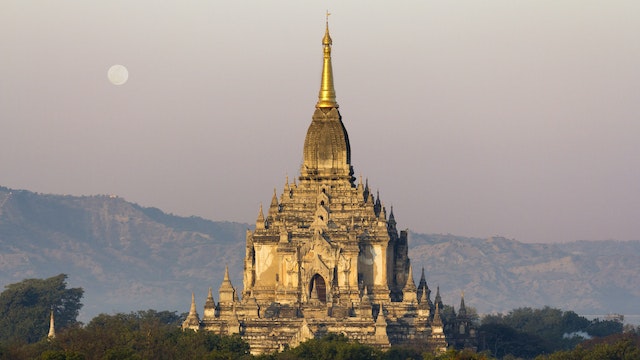 With its 170ft-high, gold corn-cob hti (decorated pinnacle) shimmering across the plains, Ananda is one of the finest, largest, best-preserved and most revered of all Bagan temples. Thought to have been built between 1090 and 1105 by King Kyanzittha, this perfectly proportioned temple heralds the stylistic end of the early Bagan period and the beginning of the middle period.

The central square measures 175ft along each side. Upper floors are closed to visitors. The entrance ways make the structure a perfect Greek cross; each entrance is crowned with a stupa finial. The base and the terraces are decorated with 554 glazed tiles showing scenes from the Jataka (stories of the Buddha's past lives) thought to be derived from Mon texts. Look back as you enter to see the huge carved-teak doors that separate interior halls from cross passages on all four sides.

Facing outward from the centre of the cube are four 31ft-tall standing buddhas. Only the Bagan-style images facing north and south are original; both display the dhammachakka mudra (a hand position symbolising the Buddha teaching his first sermon). The other two images are replacements for figures destroyed by fire in the 1600s. All four have bodies of solid teak, though guides may claim that the southern image is made of a bronze alloy. Guides like to point out that if you stand by the donation box in front of the original southern buddha, his face looks sad, while from a distance he tends to look mirthful.

The western and eastern standing buddha images are done in the later Konbaung, or Mandalay, style. If looked at from the right angle, the two lions at the eastern side resemble an ogre. A small, nut-like sphere held between the thumb and middle finger of the east-facing buddha image is said to resemble a herbal pill, and may represent the Buddha offering dhamma (Buddhist teachings) as a cure for suffering. Both arms hang at the image’s sides with hands outstretched, a mudra (hand position) unknown to traditional Buddhist sculpture outside this temple.

The west-facing buddha features the abhaya mudra (the hands outstretched, in the gesture of no fear). At its feet sit two life-size lacquer statues, said to represent King Kyanzittha and Shin Arahan, the Mon monk who initiated King Anawrahta into Theravada Buddhism. Inside the western portico are two symbols on pedestals of the Buddha’s footprints.

Don’t leave without taking a brief walk around the outside of the temple, where you can see many glazed tiles and lovely views of the spires and terraced roofs (often away from the hassle of vendors too).

In 1990, on its 900th anniversary, the temple spires were gilded. The remainder of the temple exterior is whitewashed from time to time. Ananda Pahto was damaged during the 2016 earthquake and was under repair at the time of research, but it remains open to visitors.

It can feel more like a souvenir stand than a temple given the proliferation of peddlers outside selling books, postcards and oil paintings, but that shouldn’t dissuade you from visiting. Ananda is roughly 1600ft east of Thatbyinnyu, 1600ft north of Shwesandaw and 0.6 miles northwest of Dhammayangyi Pahto. Most visitors access it from the northern side, where the highest concentration of hawkers is. For a quieter approach, enter from the eastern side.