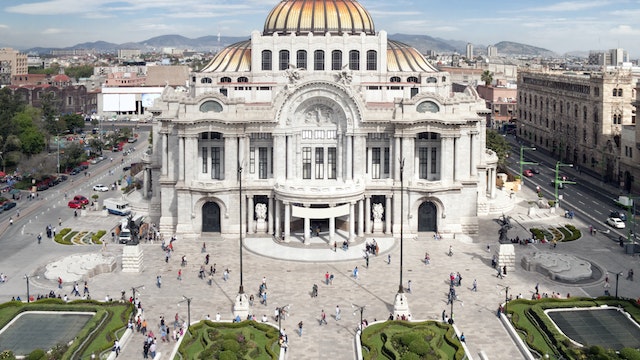 Construction on the iconic building began in 1905 under Italian architect Adamo Boari, who favored neoclassical and art nouveau styles. Complications arose as the heavy marble shell sank into the spongy subsoil, and then the Mexican Revolution intervened. Architect Federico Mariscal eventually finished the interior in the 1930s, utilizing the more modern art deco style. With art nouveau on the outside and art deco on the inside, the Palacio de Bellas Artes (Palace of Fine Arts) is considered one of the most spectacular buildings from this era.

At the west end of the 3rd floor is Diego Rivera’s famous El hombre en el cruce de caminos (Man at the Crossroads), originally commissioned for New York’s Rockefeller Center. The Rockefellers had the original destroyed because of its anti-capitalist themes, but Rivera re-created it here in 1934.

The renovated Bellas Artes theater is itself a masterpiece (though only viewable during performances), with a stained-glass curtain depicting the Valle de México. Based on a design by Mexican painter Gerardo Murillo (aka Dr Atl), it was assembled by New York jeweler Tiffany & Co from almost a million pieces of colored glass. The theater is the stage for seasonal opera and symphony performances and the Ballet Folklórico de México.

Admission is M$75 per adult and free for those under 13 or with a disability. Entry is free on Sundays for both foreigners and Mexican nationals. It's not possible to book online in advance or reserve tickets – they must be purchased on the day from the museum ticket office.

There are lofty views of the Palacio from the cafe terrace of the Sears building across the road.