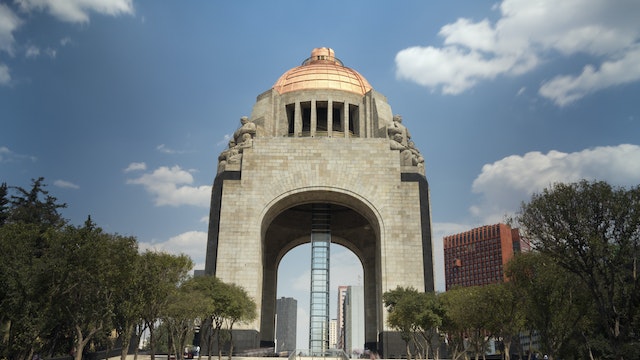 Unveiled in 1938, this monument contains the tombs of the revolutionary and post-revolutionary heroes Pancho Villa, Francisco Madero, Venustiano Carranza, Plutarco Elías Calles and Lázaro Cárdenas. The star today is the 65m-high summit paseo linternilla accessed by glass elevator and opening to a spiraling staircase that ascends to a round terrace with a panoramic view of the city. Below it is the equally impressive, though not as tall, 360 observation deck, which is as high as you can go without the all-access pass.

You can also access the skeleton of the structure in the 1910 Structure Galleries, and there is an interesting basement art gallery, the Paseo Cimentación, where you can check out temporary art exhibitions amid a labyrinth of gigantic steel beams that serve as the structure's foundation.

Underlying the plaza and monument, the spruced-up Museo Nacional de la Revolución covers a 63-year period, from the implementation of the constitution guaranteeing human rights in 1857 to the installation of the post-revolutionary government in 1920. Explanatory text is in Spanish only. Originally meant to be a legislative chamber, construction of the Monumento a la Revolución was interrupted by the Revolution, and there was talk of demolishing the building, but instead it was modified and given a new role.

Kids love frolicking in the plaza's geyser-like fountains, while at night the monument's renovated architectural features are highlighted by colorful lights.