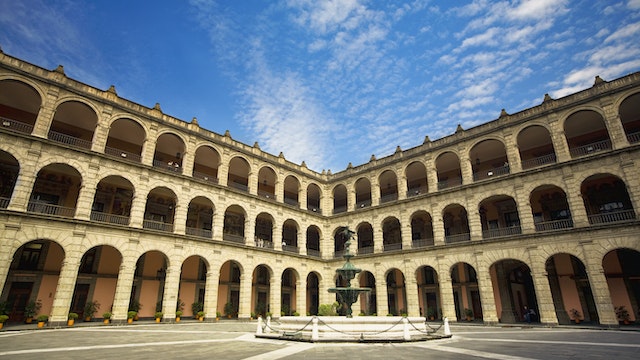 As the seat of the federal branch of the Mexican government, the Palacio Nacional (National Palace) is home to the offices of the president of Mexico and the Federal Treasury. It also contains the Biblioteca Miguel Lerdo de Tejada, one of the most renowned and important libraries in the country – the walls are covered in stunning murals. But the Palacio Nacional is probably most renowned among visitors for the many stunning artworks by Diego Rivera, one of Mexico's most famous artists.

The first palace on this spot was built by Aztec emperor Moctezuma II in the early 16th century. Spanish colonizer Hernán Cortés destroyed the palace in 1521, along with most of the other Aztec structures in the area, but there are records of how lavishly decorated and impressive the emperor's palace was in the form of letters Cortés sent back to the Spanish king.

The conquistador then hired two Spanish architects to rebuild the structure as a fortress with three interior courtyards. In 1562 the Spanish crown purchased the building from Cortés’ family to house the viceroys of Nueva España, a function it served until Mexican independence. The name was changed from Viceroy Palace to its current moniker in honor of the end of Mexico's colonisation.

As you face the palace, high above the center door hangs the Campana de Dolores, the bell rung in the town of Dolores Hidalgo by Padre Miguel Hidalgo in 1810 at the start of the War of Independence. From the balcony underneath it, the president delivers the grito (shout) – ¡Viva México! – on the evening of September 15 to commemorate independence.

Diego Rivera's 'The History of Mexico'

Inside this grandiose palace you'll see Diego Rivera murals (painted between 1929 and 1951) that depict Mexican civilization from the arrival of Quetzalcóatl (the Aztec plumed serpent god) to the post-revolutionary period. The nine murals covering the north and east walls of the 1st level above the patio chronicle indigenous life before the Spanish conquest.

The murals are located in the open air, covering the walls of an internal courtyard. Nothing can really prepare you for the shock and awe of turning a corner and seeing them in all their glory for the first time. It truly is a must-see attraction in Mexico City.

Entry is free, which is why it's such a popular attraction with both tourists and locals! There are guides available but they're not really necessary unless you're a Rivera superfan. Be aware that this is a working government building, so it's important to be respectful of that as you explore your surroundings. It will occasionally close at odd times if there are visiting dignitaries or government functions, so check in advance of your visit to avoid disappointment.