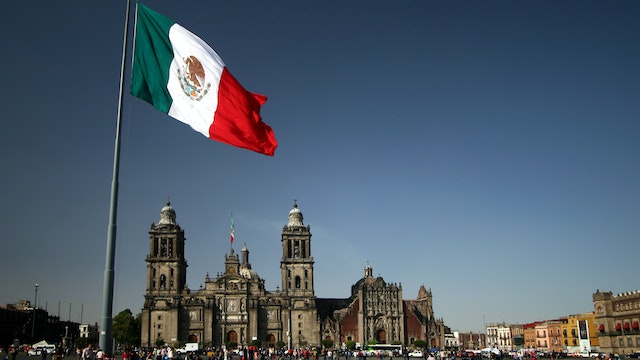 The heart of Mexico City is the Plaza de la Constitución. Residents began calling it the Zócalo, meaning ‘base,’ in the 19th century, when plans for a major monument to independence went unrealized, leaving only the pedestal. Measuring 220m from north to south, and 240m from east to west, it’s one of the world’s largest city squares.

The ceremonial center of Aztec Tenochtitlán, known as the Teocalli, lay immediately northeast of the Zócalo. Today the Zócalo is home to the powers that be. On its east side is the Palacio Nacional (the presidential palace), on the north is the Catedral Metropolitana, and on the south are the city government offices. Jewelry shops and extravagant hotels line the arcade known as the Portal de Mercaderes on the plaza’s west side.

The Danzantes Aztecas dance daily in the plaza, wearing snakeskin loincloths and shell ankle bracelets and chanting in Náhuatl. Drummers bang on the conga-like huehuetl (indigenous drum) and barrel-shaped teponaztli. It is meant to evoke the Aztec mitote, a frenzied ceremony performed by preconquest Mexicans at harvest times, although scant evidence exists of the actual dance moves.

The square has variously served as a forum for mass protests, free concerts, a human chessboard, a regular gallery of Día de Muertos (Day of the Dead) altars and an ice-skating rink. It’s even been a canvas for photo artist Spencer Tunick, who filled the square with 18,000 nude Mexicans in May 2007.

The huge Mexican flag flying in the middle of the Zócalo is ceremonially raised at 8am by soldiers of the Mexican army, then lowered at 6pm.