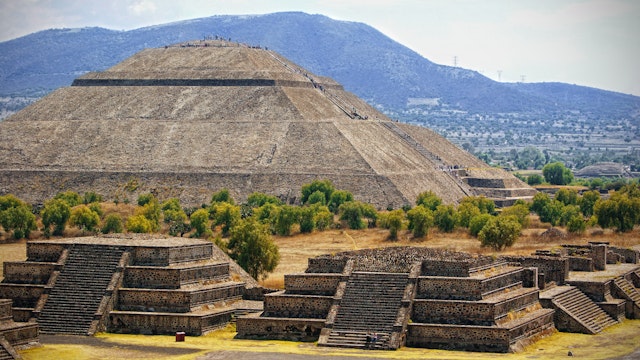 The world’s third-largest pyramid – surpassed in size only by Egypt’s Cheops (which is also a tomb, unlike the temples here) and the pyramid of Cholula – overshadows the east side of the Calzada de los Muertos. When Teotihuacán was at its height, the pyramid's plaster was painted bright red, which must have been a radiant sight at sunset. Clamber (carefully by rope) up the pyramid’s 248 uneven steps – yes, we counted – for an inspiring overview of the ancient city.

The Aztec belief that the structure was dedicated to the sun god was validated in 1971, when archaeologists uncovered a 100m-long underground tunnel leading from the pyramid’s west flank to a cave directly beneath its center, where they found religious artifacts. It’s thought that the sun was worshipped here before the pyramid was built and that the city’s ancient inhabitants traced the origins of life to this grotto.

The pyramid's base is 222m long on each side, and it’s now just over 70m high. The pyramid was cobbled together around 100 CE, from three million tonnes of stone, without the use of metal tools, pack animals or the wheel.

No big backpacks are permitted up the Pirámide del Sol, and children must be accompanied by adults. Avoid the vernal equinox (roughly March 19 or 21) when over half a million New Age visitors climb the pyramid in one day.