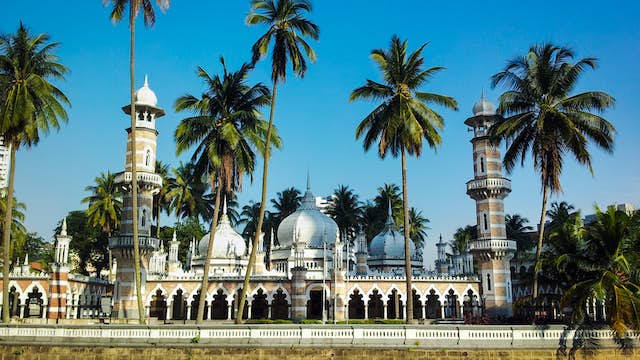 This graceful, onion-domed mosque, designed by British architect AB Hubback, borrows Mogul and Moorish styles with its brick-and-plaster banded minarets and three shapely domes. Located where the Gombak and Klang rivers meet, Masjid Jamek was the first brick mosque in Malaysia when completed in 1909. It remained the city's centre of Islamic worship until the opening of the National Mosque in 1965.

You can visit the inside of the mosque and relax in its surrounding grounds and gardens outside prayer times. Dress modestly – cover shoulders and below the knee; robes are available to borrow.

In 2017 the mosque was renamed in honour of Sultan Abdul Samad, the fourth Sultan of Selangor, who reigned from 1857 to 1898.