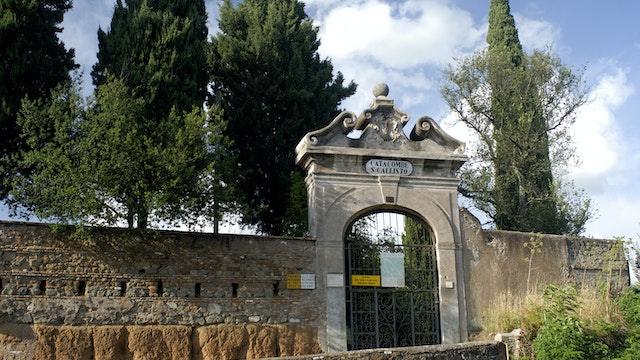 These are the largest and busiest of Rome’s catacombs. Founded at the end of the 2nd century and named after Pope Calixtus I, they became the official cemetery of the newly established Roman Church. In the 20km of tunnels explored to date, archaeologists have found the tombs of 16 popes, dozens of martyrs and thousands upon thousands of Christians. Tours (in English and many other languages) last about 45 minutes and give a good idea of the seemingly endless corridors stretching underground.

The patron saint of music, St Cecilia, was also buried here, though her body was later removed to Basilica di Santa Cecilia in Trastevere. When her body was exhumed in 1599, more than a thousand years after her death, it was apparently perfectly preserved, as depicted in Stefano Maderno’s softly contoured sculpture, a replica of which is here. On tours, the guides offer many good details of early Christian life. When the grounds are open, to reach the catacombs use the nearly 1km access road in lieu of the parallel stretch of the Via Appia Antica. It's much quieter, with shady trees and sweeping views.