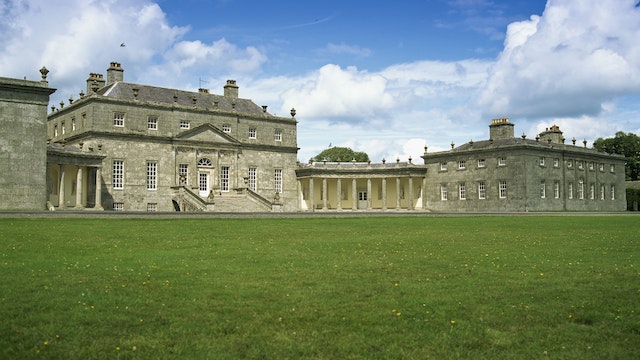 Magnificent Russborough House is one of Ireland's finest stately homes, a Palladian palace built for Joseph Leeson (1705–83), later the first Earl of Milltown and, later still, Lord Russborough. Since 1952 the house has been owned by the Beit family, who founded the De Beers diamond-mining company and stocked the mansion with a remarkable art collection, including masterpieces by Velázquez, Vermeer, Goya, Rubens and others. Admission includes a 45-minute guided tour of the house. It's 5km southwest of Blessington.

Russborough was built between 1741 and 1751 to the design of Richard Cassels, who was at the height of his fame as an architect. Poor old Richard didn't live to see it finished, but the job was well executed by Francis Bindon. The house remained in the Leeson family until 1931, but it was only after the Beits bought the pile that the drama began.

In 1974 the IRA stole 16 of the paintings, all of which were later recovered. In 1984 Loyalist paramilitaries followed suit, hiring Dublin criminal Martin Cahill to mastermind the heist. Although most of that haul was also recovered, some pieces were damaged beyond repair. In 1988 Beit donated the most valuable works to the National Gallery, but that didn't stop two more break-ins, in 2001 and 2002: one of the stolen paintings was a Gainsborough that had already been taken – and recovered – twice before. Thankfully all of the paintings were recovered after both attempts, but where a succession of thieves couldn't succeed, the cost of upkeep did: in 2015 the owners announced they were going to auction off 10 of the paintings, a decision that caused much consternation as the family had always maintained that the collection was to be held in trust for the Irish people.

On the tour of the house, which is decorated in typical Georgian style, you'll see all the (remaining) important paintings, which, given the history, is a monumental exercise in staying positive.

Its 80-hectare parklands encompass an 18th-century walled garden, a hedge maze, themed walking trails (including a willdlife trail where you can spot badgers, foxes, hares and swans), and a birds of prey centre (adult/child €8/6) with 40 species, including owls and golden eagles.