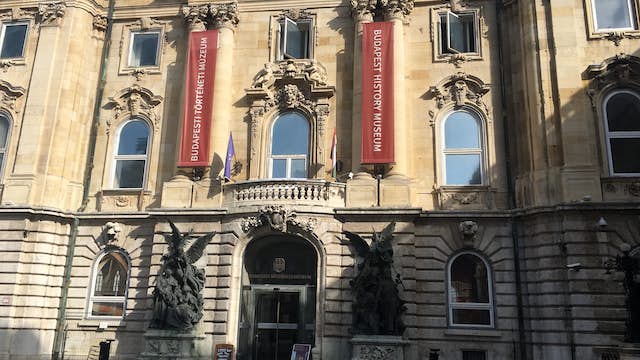 The Castle Museum, part of the multibranched Budapest History Museum, explores the city's 2000-year history over four floors. Restored palace rooms dating from the 15th century can be entered from the two-level basement, where there are three vaulted halls. One of the halls features a magnificent Renaissance door frame in red marble bearing the seals of Queen Beatrix and her husband, King Matthias Corvinus, leading to the Gothic and Renaissance Halls, King's Cellar (1480) and 14th-century Tower Chapel.

On the ground floor exhibits showcase Budapest during the Middle Ages, with important Gothic statues of courtiers, squires and saints discovered during excavations in 1974. There are also artefacts recently recovered from a well dating from Turkish times, most notably a 14th-century tapestry of the Hungarian coat of arms with the fleur-de-lis of the House of Anjou.

A wonderful exhibit on the 1st floor called 'Light & Shadow: 1000 Years of a Capital' traces the history of Budapest from the arrival of the Magyars and the Turkish occupation to modern times in 10 multimedia sections, taking an interesting and very intelligent look at housing, ethnic diversity, religion and other issues over the centuries.

On the 2nd floor the exhibits reach way back – Budapest from prehistoric times to the end of the Avar period at the end of the 8th century. The excellent audio guide is 1200Ft