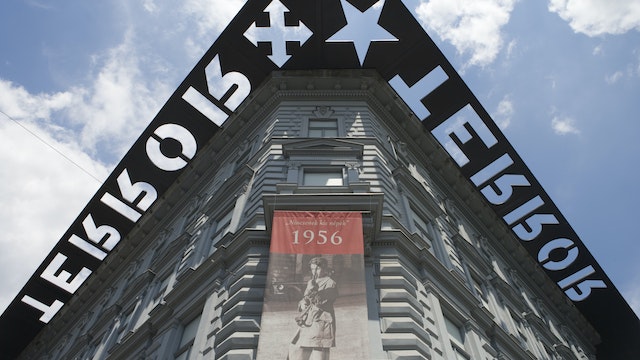 The headquarters of the dreaded ÁVH secret police houses the disturbing House of Terror, focusing on the crimes and atrocities of Hungary's fascist and Stalinist regimes in a permanent exhibition called Double Occupation. The years after WWII leading up to the 1956 Uprising get the lion's share of the exhibition space (almost three-dozen spaces on three levels). The reconstructed prison cells in the basement and the Perpetrators' Gallery on the staircase, featuring photographs of the turncoats, spies and torturers, are chilling.

The (communist) star and the (fascist) pointed Greek cross at the entrance and the tank in the central courtyard make for jarring introductions and the wall outside displaying metallic plaques and photos of the many victims speaks volumes. The building has a ghastly history – it was here that activists of every political persuasion before and after WWII were taken for interrogation and torture. The walls were apparently of double thickness to muffle the screams.