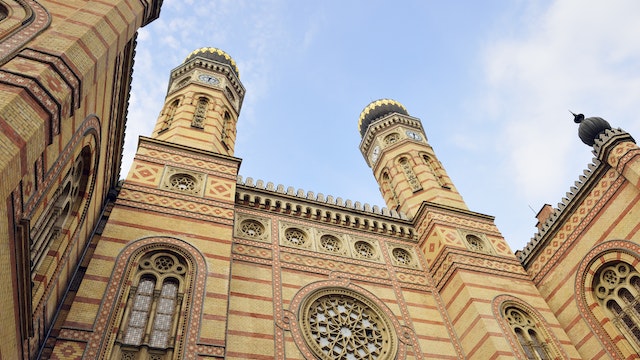 Budapest's stunning Great Synagogue is the world's largest Jewish house of worship outside New York City. Built in 1859, the synagogue has both Romantic and Moorish architectural elements. Inside, the Hungarian Jewish Museum & Archives contains objects relating to both religious and everyday life. On the synagogue’s north side, the Holocaust Tree of Life Memorial presides over the mass graves of those murdered by the Nazis.

Inside this Neolog (or Conservative) synagogue, built according to the design of Viennese architect Ludwig Förster, don't miss the central rose window and the sumptuous organ, dating back to 1902.

The museum includes items such as a 3rd-century Jewish headstone from Roman Pannonia, ritualistic silver and a handwritten book of the local Burial Society from the late 18th century.

The leaves of the Tree of Life Memorial, designed in 1991 by Imre Varga, are inscribed with the names of some of the hundreds of thousands of victims of the Holocaust. Nearby in Goldmark Hall you'll find the Jewish Quarter Exhibition with interactive displays, video and artefacts, documenting what life was like in this area from the 18th century onward.