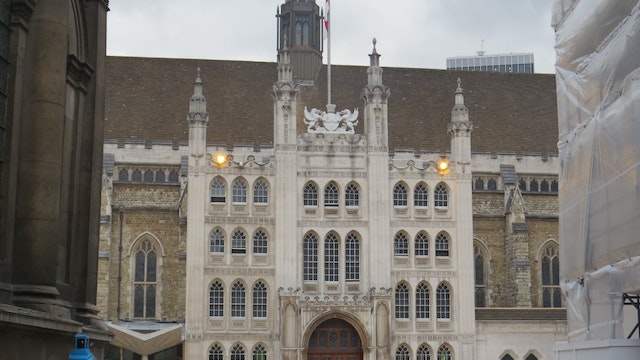 The City of London has had centuries to acquire an impressive art collection, which it's shown off since 1885. The original gallery was destroyed in the Blitz, and when the site was redeveloped in 1985, the remains of a Roman amphitheatre (c 70 CE) were discovered, so the gallery was redesigned to incorporate the ruins. The 4500-piece collection is particularly strong on London scenes and Victorian art, including significant pre-Raphaelite works by John Everett Millais and Dante Gabriel Rossetti.

Taking over an entire gallery wall is American artist John Singleton Copley's Defeat of the Floating Batteries at Gibraltar (1791), which depicts a 1782 British victory. This immense oil painting was removed to safety just three weeks before the gallery was hit by a German bomb in 1941.

Nearly half of the gallery's collection consists of scenes in London, from great Venetian painter Canaletto's The Monument from Gracechurch St to 1960s visions of Smithfield Market and Leadenhall Market by Jacqueline Stanley. New works continue to be purchased on the themes of money, trade and capitalism, historically the City's chief concerns.

While only a few remnants of the stone walls lining the eastern entrance of the Roman amphitheatre still stand, they’re imaginatively fleshed out with a black-and-fluorescent-green outline of the missing seating, and computer-meshed images of spectators and gladiators. Black markings on the square outside Guildhall indicate the extent and scale of the stadium, which could seat up to 6000 spectators.