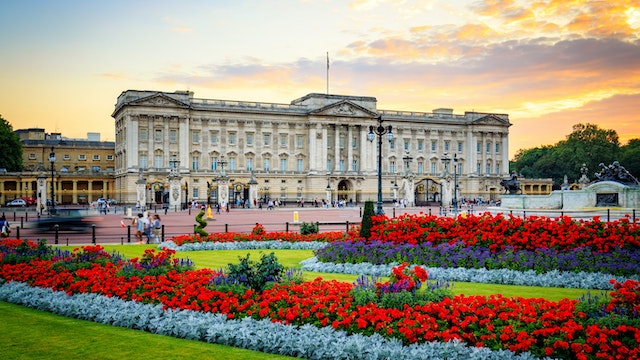 Built in 1703 for the Duke of Buckingham, Buckingham Palace replaced St James's Palace as the monarch's official London residence in 1837. Queen Elizabeth II divides her time between here, Windsor Castle and, in summer, Balmoral Castle in Scotland. If she’s in residence, the square yellow, red and blue Royal Standard is flown; if not, it's the Union Flag. The 19 lavishly furnished State Rooms are open to visitors when Her Majesty is on vacation from mid-July to September.

The State Rooms inside Buckingham Palace

The self-guided tour starts in the Grand Hall at the foot of the monumental Grand Staircase, commissioned by King George IV in 1828. It takes in architect John Nash's Italianate Green Drawing Room, the State Dining Room (all red damask and Regency furnishings), the Blue Drawing Room (which has a gorgeous fluted ceiling by Nash) and the White Drawing Room, where foreign ambassadors are received.

Admission includes entry to a themed special exhibition (royal couture during the Queen's reign, growing up at the palace etc) in the enormous Ballroom, built between 1853 and 1855, and these displays are often the main reason for a visit. The Throne Room is rather anticlimactic, with his-and-her pink chairs monogrammed "ER" and "P".

Wandering the gardens is another highlight of a visit to Buckingham Palace – in addition to admiring some of the 350 or so species of flowers and plants and listening to the many birds, you’ll get beautiful views of the palace and a peek at its famous lake. Picnics are allowed, but with some restrictions.

Buckingham Palace is open to visitors in the summer months when the Queen is on vacation. It can also sometimes be visited in winter (December to February), but only on select days.

Entry is by timed ticket, which is best booked online in advance. The self-guided tour, using excellent audio-guide commentary, takes about two hours. Security is airport-style and unsurprisingly strict. Large bags are not permitted inside. Ask staff to stamp your ticket before you leave for free access for a year.

The State Rooms are fully accessible, but it's a long tour involving lots of standing and with few places to sit down. Have a snack and use the toilet before you enter. There's a cafe and toilets but only at the end of the tour, and it's not easy to get there and then back to where you left off.

The closest Underground stations to Buckingham Palace are Green Park on the Piccadilly, Victoria and Jubilee Lines and St James's Park on the District and Circle Lines.

Changing of the Guard

If you're not able to tour the Palace itself, you may want to see the pageantry of soldiers in red uniforms and bearskin hats parading down the Mall and into Buckingham Palace. The 45-minute Changing of the Guard ceremony swaps out the Old Guard (Foot Guards of the Household Regiment) with the New Guard on the forecourt, and ends with a full military band. The pomp and circumstance can feel far away when you're near the back trying to watch through a forest of selfie sticks, so get here at least 45 minutes before the main event. It's free to attend – check the calendar online as the ceremony is sometimes cancelled due to bad weather or road closures.