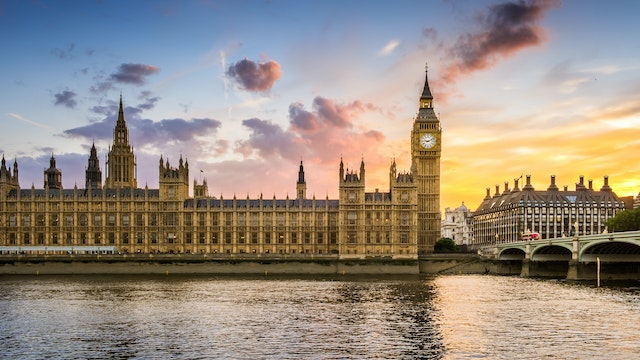 Both the elected House of Commons and the House of Lords, who are appointed or hereditary, sit in the sumptuous Houses of Parliament, officially called the Palace of Westminster. This neo-Gothic building dates from the mid-19th century – its oldest part is 11th-century Westminster Hall, one of only a few sections that survived a catastrophic 1834 fire. A visit to the Houses of Parliament is a journey to the very heart of British democracy.

The palace's most famous feature is its clock tower, Elizabeth Tower (better known as Big Ben), covered in scaffolding until restoration works are finished. Big Ben is actually the 13.7-tonne bell hanging inside and is named after Benjamin Hall, the first Commissioner of Works when the tower was completed in 1859.

One of the most interesting features of the Palace of Westminster, the seat of the English monarchy from the 11th to the early 16th centuries, is Westminster Hall. Originally built in 1097, it is the oldest surviving part of the complex; the awesome hammer-beam roof was added between 1393 and 1401 and is the largest medieval timber roof in northern Europe. The only other part of the original palace to survive the devastating 1834 fire is the Jewel Tower, built in 1365 and used to store the monarch's valuables.

Westminster Hall was used for coronation banquets in medieval times and served as a courthouse until the 19th century. The trials of William Wallace (1305), Thomas More (1535), Guy Fawkes (1606) and King Charles I (1649) took place here. In the 20th century, monarchs and Prime Minister Winston Churchill lay in state here after their deaths.

Parliament is split into two houses. The green-hued House of Commons is the lower house, where the 650 elected Members of Parliament (MPs) sit. Traditionally the home of hereditary blue bloods, the scarlet-decorated House of Lords, with around 800 members, now has peers appointed through various means. Both houses debate and vote on legislation, which is then presented to the Queen for her Royal Assent (in practice, this is a formality; the last time Royal Assent was denied was in 1707). At the annual State Opening of Parliament in May or June, the Queen takes her throne in the House of Lords, having arrived in the gold-trimmed Irish State Coach from Buckingham Palace (her crown travels alone with equerries in Queen Alexandra's State Coach).

Currently all visits to Parliament are suspended, but virtual tours and workshops are available.

Once tours resume, book your slot in advance (usually only available on a Saturday), and be prepared for lines and thorough security checks before you're allowed access to the building. UK residents can also approach their MPs to arrange a free tour.

When visiting restrictions lift and Parliament is in session, visitors are welcome to attend debates for free. It’s not unusual to have to wait for hours to access the chambers. The best (and busiest) time to watch a debate is during Prime Minister’s Question Time at noon on Wednesday. The debating style in the Commons is quite combative, but not all debates are flamboyant argumentative duelling matches – many are rather boring and long-winded.