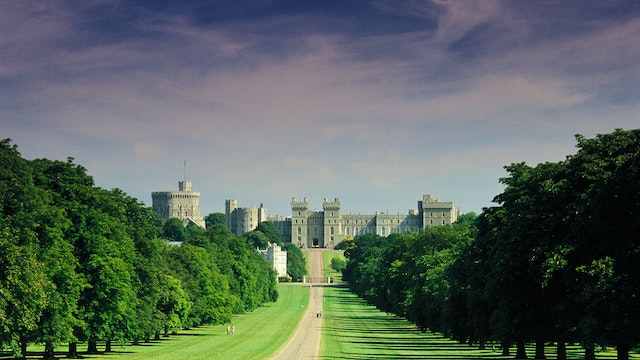 The world’s largest and oldest continuously occupied fortress, Windsor Castle is a majestic vision of battlements and towers. Used for state occasions, it’s one of the Queen’s principal residences; when she’s at home, the Royal Standard flies from the Round Tower.

The story of Windsor Castle began in 1071, when William the Conqueror ordered the construction of a hilltop, earth-and-timber fortress. A century later, his great-grandson Henry II replaced it with a stone round tower. Edward III added a Gothic palace; Elizabeth I, the sturdy North Terrace; and Charles II gave the State Apartments a baroque makeover, creating an ‘English Versailles’. George III stuck on turrets and battlements, to make it look more medieval, while George IV inserted a modern palace into the ancient ensemble. After a thousand years of rebuilding, the 951-room castle thus displays an amazing range of architectural styles, from half-timbered fired brick to Gothic stonework.

The castle precincts are divided into the Lower, Middle and Upper Wards. A visit will take you through the lavish State Apartments and beautiful chapels; certain areas may be off limits if in use. Here are some of the highlights:

Created by George IV in the 1820s as a welcoming area for heads of state and official guests, this hall was later closed by Queen Victoria in 1866 – its entry sealed by a stone wall – and used primarily for storage space for 150 years. Reopened to the public in 2019, restoration works included chipping off layers of paint to reveal the intricate Regency ceiling bosses created by stuccoist Francis Bernasconi, and linking the visitor entrance on the North Terrace with the State Entrance Hall on the south side, which offers an uninterrupted view of the Long Walk. Also on display are stone remnants believed to be part of the buildings constructed by Henry I around 1110.

Filling a side chamber as you approach the State Apartments from the North Terrace of the Upper Ward, this astonishing creation is not a toy but a masterpiece of artful miniaturization. Designed at 1:12 scale by Sir Edwin Lutyens for Queen Mary, and completed in 1924, it displays a phenomenal attention to detail. It's equipped with fully functional plumbing, including flushing toilets, plus electric lights, tiny Crown Jewels, a silver service and wine cellar, and even a fleet of six cars in the garage.

The State Apartments, in the castle’s Upper Ward, reverberate with history and style. Around two dozen rooms are usually open to the public, with the crossed swords, suits of armour and banners of the initial Grand Staircase setting the tone.

A seated statue of Queen Victoria presides over the Grand Vestibule at the top, which displays tribute and trophies from the British Empire. Highlights include a life-sized tiger’s head of gold with crystal teeth, seized from Tipu, sultan of Mysore, and the musket ball that killed Lord Nelson. The Waterloo Chamber beyond, commemorating the 1815 battle, is festooned with portraits of triumphant generals and diplomats.

Two self-guided routes – ceremonial and historic – take in the fabulous St George’s Hall, the headquarters of the 24-strong order of the Knights of the Garter, which is still used for state banquets. Its ornate ceiling, re-created following a devastating fire in 1992 – it began in the adjoining Lantern Lobby – holds the shields of Knights past and present. Blank shields record "degraded" knights expelled from the order; most are foreign royals who declared war on Britain.

This elegant chapel, commissioned for the Order of the Garter by Edward IV in 1475, is a fine example of Perpendicular Gothic architecture. The nave and beautiful fan-vaulted roof were completed under Henry VII, and the final nail driven under Henry VIII in 1528.

Along with Westminster Abbey, it serves as a royal mausoleum. Both Henry VIII and Charles I lie beneath the beautifully carved 15th-century Quire, while the Queen's father (George VI) and mother (Queen Elizabeth) rest in a side chapel. It’s also where Prince Harry married Meghan Markle in May 2018, and where Prince Philip's funeral took place in 2021.

Built in 1240 and dedicated to Edward the Confessor, the small Albert Memorial Chapel was the place of worship for the Order of the Garter until St George's Chapel, alongside, snatched away that honour. After Prince Albert died at Windsor Castle in 1861, Queen Victoria ordered the chapel to be restored as a monument to her husband, adding a magnificent vaulted roof that incorporates gold mosaic pieces from Venice.

Although the chapel holds a monument to the prince, he’s actually buried, with Victoria, in the Royal Mausoleum at Frogmore House in Windsor Great Park. Their youngest son, Prince Leopold (Duke of Albany), is, however, buried here.

Changing of the Guard

A fabulous spectacle, with triumphant tunes from a military band and plenty of foot stamping from smartly attired troops in red uniforms and bearskin caps, the changing of the guard draws crowds to Windsor Castle each day. Although the Household Troops march through the streets of Windsor, the actual handover happens in the Lower Ward or, when the Queen is in official residence, the Quadrangle in the Upper Ward. Weather permitting, it usually takes place at 11am on Tuesdays, Thursdays and Saturdays, but this is subject to change. Check the Household Division website for more information.

Entry is timed and tickets must be booked in advance. The price includes a multimedia guide. If you wish to visit again, your ticket can be converted to a year-long pass – just ask a member of staff before you leave.