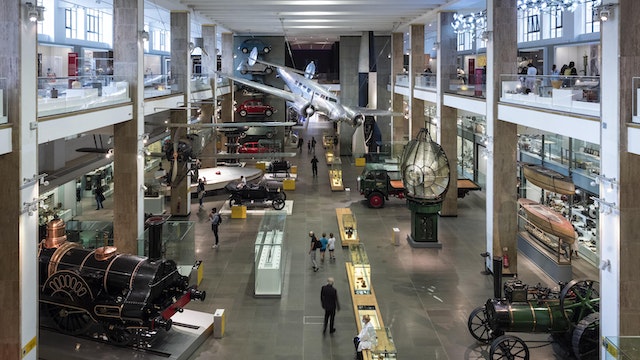 The Science Museum will mesmerize with its interactive and educational exhibits covering everything from early technology to space travel. Take the family along to nurture a wide-eyed fascination for the complexities of the world and the cosmos. Here are the most popular galleries and displays at the Science Museum, along with all the practical information you need to plan your visit.

The basement at the Science Museum is home to the Garden, an incredible sensory play zone, perfect for children under the age of six. Here they can play with water, light, sound, and work on their construction skills. Take a waterproof apron or a spare set of clothes for the water-play area, which is usually besieged by splashing tots.

The Making the Modern World Gallery on level 0 is a visual feast of locomotives, planes, cars and other revolutionary inventions. Objects on display here track progress from industrialization in the 1750s through to the present day.

Also on level 0 and a perennial favorite is Exploring Space, a gallery featuring genuine rockets and satellites. There's a full-size replica of the Eagle, the lander that took Neil Armstrong and Buzz Aldrin to the moon in 1969, and the real Soyuz module that transported astronauts Tim Peake, Yuri Malenchenko and Tim Kopra back from the International Space Station in 2016.

The fantastic Information Age Gallery on level 2 showcases how information and communication technologies – from the telegraph to smartphones – have transformed our lives since the 19th century. Standout displays include wireless messages sent by a sinking Titanic, the first BBC radio broadcast and a Soviet BESM-6 supercomputer.

Also on level 2 is Mathematics: the Winton Gallery, designed by Zaha Hadid Architects, is a riveting exploration of maths in the real world and how it can impact on all aspects of everyday life.

The Medicine Galleries, which opened on level 2 in 2019, look at the medical world using objects from both the museum's collections and those of Sir Henry Wellcome, pharmacist, entrepreneur, philanthropist and collector. See the world's first MRI machine, a prosthetic arm, and robotic surgery tools, alongside more recent developments such as vials from COVID-19 mass vaccination campaigns.

The Flight Gallery on level 3 is a favorite place for children, with its gliders, hot-air balloons and aircraft, including the De Havilland Gipsy Moth airplane Jason I, which Amy Johnson flew to Australia in 1930. There are also various flight-simulators to try out (additional charge): have a 3D flights with the Red Arrows; replicate a low-level mission aboard a Typhoon fighter jet; and take part in a virtual-reality experience with (a digital) Tim Peake, British astronaut, on Space Descent.

Also on level 3, Wonderlab: The Equinor Gallery (adult/child £11/9) explores scientific phenomena in a fun and educational way. Kids will love the hands-on exhibits where they can recreate sound waves, sit by a model Earth as it orbits the sun, run test flights of their own paper plane creations over a giant fan, experiment with pulley systems, and challenge their engineering skills by building a bridge with curved blocks. Daily shows include live experiments with – occasional explosions – and knowledgeable "Explainers" are on hand to chat you through anything in the gallery that piques your curiosity.

General admission to the Science Museum is free, but must be booked online in advance. Visitors wanting to go to a specific gallery should check if tickets need to be booked in advance, and beware that your visit may have strict time restrictions (for example, visits to the Garden are for 20-minute slots only).

There are charges for tickets to the IMAX, virtual-reality experiences, flight simulators, Wonderlab, and special events.

There is a cafe and snack bar within the museum. Lifts and toilets are accessible throughout, and it's possible to borrow a wheelchair.