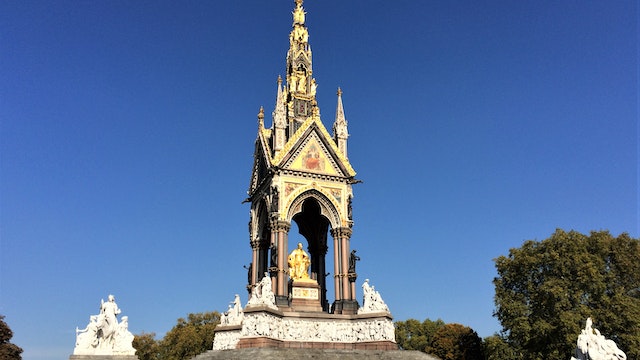 This splendid Victorian confection on the southern edge of Kensington Gardens is as ostentatious as its subject wasn't. Queen Victoria’s humble German husband Albert (1819–61) explicitly insisted he did not want a monument. Ignoring the good prince’s wishes, the Lord Mayor instructed George Gilbert Scott to build the 53m-high, gaudy Gothic memorial – the 4.25m-tall gilded statue of the prince, surrounded by 187 figures representing the continents (Asia, Europe, Africa and America), the arts, industry and science, went up in 1876.

An eye-opening blend of mosaic, gold leaf, marble and Victorian bombast, the renovated monument is topped with a crucifix. The statue was painted black for 80 years, originally – some say – to disguise it from WWI Zeppelins (nonetheless, the memorial was selected by German bombers during WWII as a landmark). To step beyond the railings for a close-up of the staggering 64m-long Frieze of Parnassus along the base – carved in situ – join one of the 90-minute tours.