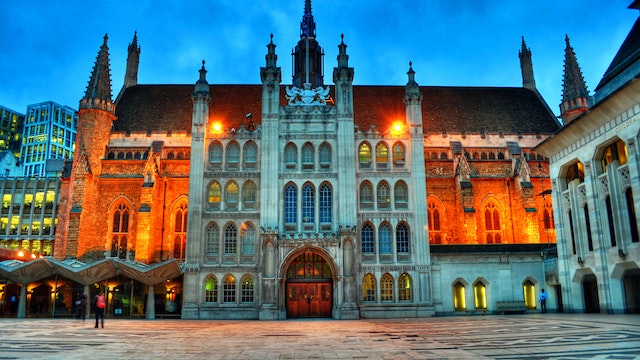 Guildhall has been the City’s seat of government for more than 800 years. The Great Hall dates from the early 15th century and is positively Hogwartsian in its Gothic grandeur, with pointy arched windows and 27m-high ceilings. It's the only remaining secular structure to have survived the Great Fire of 1666, although it was severely damaged both then and during the Blitz of 1940.

Inside it's hung with the banners and shields of London’s 12 principal livery companies, or guilds, which used to wield immense power. The lord mayor and two sheriffs are still elected annually in the vast open hall. Statues and memorials of Winston Churchill, Admiral Nelson, the Duke of Wellington and both Prime Ministers William Pitt (the Elder and the Younger) line the walls.

In the upper gallery, at the western end, are statues of the biblical giants Gog and Magog, traditionally considered to be guardians of the City; today’s figures replaced similar 18th-century statues destroyed in the Blitz. Guildhall’s stained glass was also blown out during the bombing, and a modern window in the southwestern corner depicts the city’s history: look for London’s most famous lord mayor, Richard ‘Dick’ Whittington, with his famous cat, a scene of the Great Fire and even the Lloyd's of London building.

To visit, enter through the reception of the City's modern administration block.