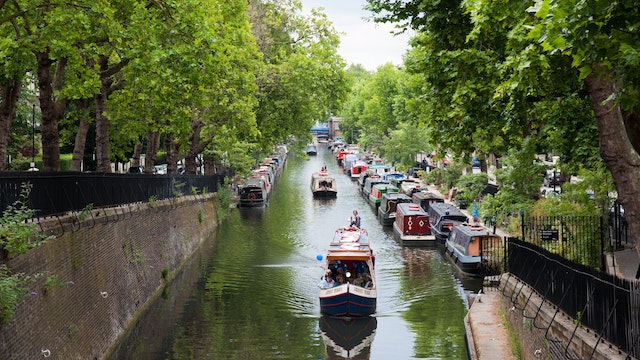 To escape the crowded streets and enjoy a picturesque, waterside side stretch of North London, take to the canals that once played such a vital role in the transport of goods across the capital. The towpath of the Regent's Canal also makes an excellent shortcut across North London, either on foot or by bike. In full, the ribbon of water runs 8.5 miles from Little Venice (where it connects with the Grand Union Canal) to the Limehouse Basin and the Thames.

If you decide to continue on, it's worth stopping at the London Canal Museum in King’s Cross to learn more about the canal's history. Shortly afterwards you'll hit the 878m-long Islington Tunnel and have to take to the roads for a spell. After joining the path again near Colebrooke Row, you can follow the water all the way to the Thames at Limehouse Basin, or divert on to the Hertford Union Canal at Victoria Park -waving to one of our authors as you pass his back garden - and head to Queen Elizabeth Olympic Park.