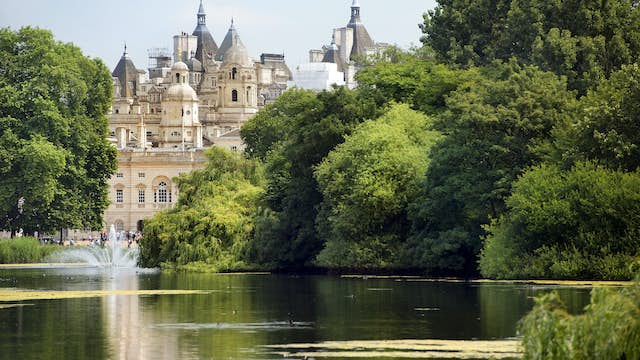 At 23 hectares, St James's is the second-smallest of the eight royal parks after Green Park. But what it lacks in size it makes up for in grooming, as it is the most manicured green space in London. It has brilliant views of the London Eye, Westminster, St James's Palace, Carlton House Terrace and Horse Guards Parade; the picture-perfect sight of Buckingham Palace from the Blue Bridge spanning the central lake is the best you’ll find.

The lake brims with ducks, geese, swans and other waterfowl – including the famous pelicans, introduced to the park in 1664 as a gift from the Russian Ambassador to King Charles II. The pelicans are fed fresh fish between 2.30pm and 3pm near Duck Island cottage.

The brightly coloured flower beds – scarlet geraniums, red tulips and yellow wallflowers – near Buckingham Palace were added in 1901 as a memorial to Queen Victoria. You can rent deckchairs during daylight hours from March to October (per hour/day £2/10) to make lounging around more comfortable.