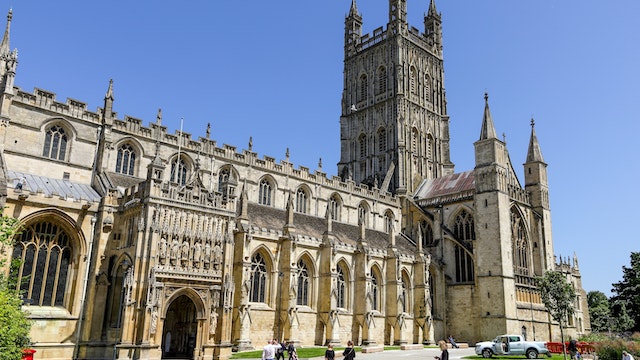 Gloucester’s spectacular cathedral is among the first and finest examples of the English Perpendicular Gothic style. Benedictine monks built a Norman church here in the 12th century, on the site of a Saxon abbey. After Edward II died mysteriously at nearby Berkeley Castle in 1327, he was buried here, and his tomb became a place of pilgrimage. Further elements, including the present-day tower, were added to the church during the 15th century.

Inside, the finest features of Norman Romanesque and Gothic design are skilfully combined, with stout columns creating a sense of gracious solidity. The Cloister, which featured in the first, second and sixth Harry Potter films, is a real highlight. Completed in 1367, this airy space contains the earliest example of fan vaulting in England and is matched in beauty only by Henry VII’s chapel at Westminster Abbey. When the sun shines through, the light-dappled Cotswold stone glows with a rosy light.

From the breathtaking 14th-century wooden choir stalls, you’ll get a good view of the imposing 22m-high Great East Window. The size of a tennis court, it was the largest in Europe when it was installed in the 1350s, and around 85% of the glass you see today is still original.

Edward II’s elaborate alabaster tomb, originally gilded and bejewelled, stands beneath the window in the northern ambulatory. Behind the altar, the glorious 15th-century Lady Chapel was largely destroyed during the Reformation, but following restoration work, completed in 2018, it’s looking wonderful once more. In addition to its soaring vaulted roof and astonishingly delicate stone arches, its Arts and Crafts stained-glass windows rank among the cathedral’s greatest treasures, featuring Adam and Eve, scenes from the life of Mary, and various English saints.

Alongside the crypt, St Andrew’s Chapel is emblazoned from floor to ceiling with colourful 19th-century frescoes that hint at how vibrant and dazzling the medieval Abbey must have been.

Tours give access to otherwise inaccessible areas including the 15th-century library and its illuminated manuscripts (weekly, 30 minutes); the 69m tower, with its amazing views (three weekly, one hour), and the Norman crypt (daily, 30 minutes). Unexpected treasures in the five simple chapels in the crypt, the very oldest part of the cathedral, range from a pillar carving of a mysterious moustachioed figure to a hefty granite font built by George Gilbert Scott in 1878.