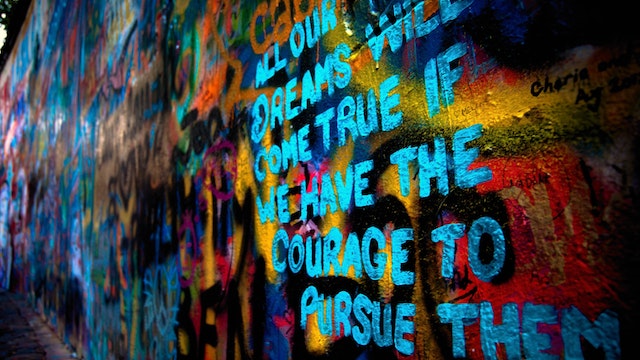 After his murder on 8 December 1980, John Lennon became a pacifist hero for many young Czechs. An image of Lennon was painted on a wall in a secluded square opposite the French embassy (there is a niche on the wall that looks like a tombstone), along with political graffiti and occasionally Beatles lyrics.

Despite repeated coats of whitewash, the secret police never managed to keep it clean for long, and the Lennon Wall became a political focus for Prague youth (a lot of Western pop music was banned by the communists, and some Czech musicians were even jailed for playing it).

Post-1989 weathering and lightweight graffiti ate away at the political messages and images, until little remained of Lennon but his eyes, but visiting tourists began making their own contributions. The wall is the property of the Knights of Malta, and they have repainted it several times, but it soon gets covered with more Lennon images, inconsequential tourist graffiti and, in recent years, political messages aimed at the current crop of politicians. The Knights long since bowed to the inevitable and don’t bother to whitewash it any more.