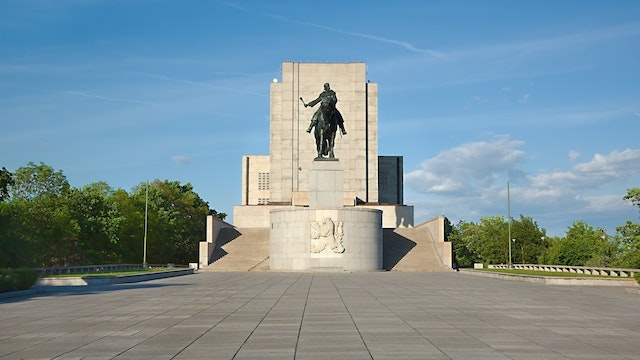 While this monument's massive functionalist structure has all the elegance of a nuclear power station, the interior is a spectacular extravaganza of polished art-deco marble, gilt and mosaics, and is home to a fascinating museum of 20th-century Czechoslovak history.

Although, strictly speaking, not a legacy of the communist era – it was completed in the 1930s – the huge monument atop Žižkov Hill is, in the minds of most Praguers over a certain age, inextricably linked with the Communist Party of Czechoslovakia, and in particular with Klement Gottwald, the country’s first ‘worker-president’.

The monument's central hall – home to a dozen marble sarcophagi that once bore the remains of communist luminaries – houses a moving war memorial with sculptures by Jan Sturša. There are exhibits recording the founding of the Czechoslovak Republic in 1918, WWII, the 1948 coup, the Soviet invasion of 1968 (poignant newsreel footage and a handful of personal possessions record the tragic story of Jan Palach, who set himself on fire to protest the Soviet invasion) and the Velvet Revolution of 1989. Upstairs you can visit the Ceremonial Hall and the Presidential Lounge.

But the most grimly fascinating part of the museum is the Frankenstein-like laboratory beneath the Liberation Hall, where scientists once battled to prevent Gottwald’s corpse from decomposing. On display in a glass-walled sarcophagus by day, his body was lowered into this white-tiled crypt every night for another frantic round of maintenance and repair. In the corner is the refrigerated chamber where Gottwald spent his nights (now occupied by the shattered remains of his sarcophagus), and in the adjoining room is a phalanx of 1950s control panels, switches and instruments that once monitored the great leader’s temperature and humidity.