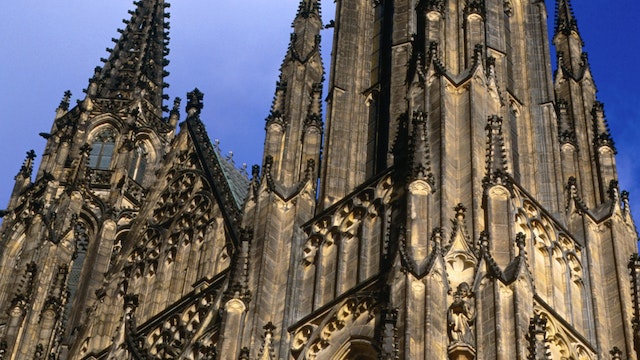 Built over a time span of almost 600 years, St Vitus is one of the most richly endowed cathedrals in central Europe. It is pivotal to the religious and cultural life of Czechia, housing treasures that range from the 14th-century mosaic of the Last Judgement and the tombs of St Wenceslas and Charles IV, to the baroque silver tomb of St John of Nepomuk, the ornate Chapel of St Wenceslas and art-nouveau stained glass by Alfons Mucha.

At first glance the cathedral's western facade, which looms above the entrance to the Third Courtyard, looks impressively Gothic, but in fact the triple doorway dates only from 1953, making it one of the last parts of the church to be completed. The foundation stone was laid in 1344 by Emperor Charles IV, on the site of a 10th-century Romanesque rotunda built by Duke Wenceslas. Charles’ original architect, Matthias of Arras (Matyáš z Arrasu), began work in 1344 on the choir in the French Gothic style, but died eight years later. His German successor, Peter Parler – a veteran of Cologne’s cathedral – completed most of the eastern part of the cathedral in a freer, late-Gothic style before he died in 1399. Renaissance and baroque details were added over the following centuries, but it was only in 1861, during the Czech National Revival, that a concerted effort was made to finish the cathedral – everything between the western door and the crossing was built during the late 19th and early 20th centuries. It was finally consecrated in 1929.

Inside, the nave is flooded with colour from stained-glass windows created by eminent Czech artists of the early 20th century – note the window (1909) by art nouveau artist Alfons Mucha in the third chapel on the northern side, to the left as you enter, which depicts the lives of Sts Cyril and Methodius. Nearby is a wooden sculpture of the crucifixion (1899) by František Bílek.

Walk up to the crossing, where the nave and transept meet, which is dominated by the huge and colourful south window (1938) by Max Švabinský, depicting the Last Judgement – note the fires of hell burning brightly in the lower-right-hand corner. In the north transept, beneath the baroque organ, are three carved wooden doors decorated with reliefs of Bohemian saints, with smaller panels beneath each saint depicting their martyrdom – look on the left-hand door to see St Vitus being tortured in a cauldron of boiling oil. Next to him is the martyrdom of St Wenceslas; he is down on one knee, clinging to a lion’s-head door handle, while his treacherous brother Boleslav drives a spear into his back. You can see that very door handle on the other side of the church – it’s now the door to the Chapel of St Wenceslas.

The eastern end of the cathedral is capped with graceful late-Gothic vaulting dating from the 14th century and ringed by side chapels. In the centre, opposite the pulpit, lies the ornate Royal Mausoleum (1571–89) with its cold marble effigies of Ferdinand I, his wife Anna Jagellonská and their son Maximilián II. On the ambulatory’s northern side, just beyond the old sacristy and the confessional booths, a wooden relief (1630) by Caspar Bechterle shows Protestant Frederick of the Palatinate (in his horse-drawn coach) legging it out of Prague after the Catholic victory at the Battle of Bílá Hora.

As you round the far end of the ambulatory you pass the tomb of St Vitus. As well as being a patron saint of Bohemia, Vitus is a patron of actors, entertainers and dancers, and is said to protect against lightning, dog bites and oversleeping. The brass crosiers set in the floor nearby mark the tombs of bishops. Further round you reach the spectacular, baroque silver tomb of St John of Nepomuk, its draped canopy supported by a squadron of silver angels (the tomb contains two tonnes of silver in all). The nearby Wallenstein Chapel contains the worn grave slabs of cathedral architects Matthias of Arras and Peter Parler. Beyond is the ornate, late-Gothic Royal Oratory, a fancy balcony with ribbed vaulting carved to look like tree branches.

The biggest and most beautiful of the cathedral’s numerous side chapels is Parler’s Chapel of St Wenceslas. Its walls are adorned with gilded panels containing polished slabs of semiprecious stones. Wall paintings from the early 16th century depict scenes from the life of the Czechs’ patron saint, while even older frescoes show scenes from the life of Christ. On the southern side of the chapel a small door – locked with seven locks – hides a staircase leading to the Coronation Chamber above the Golden Gate, where the Bohemian crown jewels are kept – you can see replicas in the Story of Prague Castle exhibition.

Admission is included with Prague Castle tour A and B tickets.