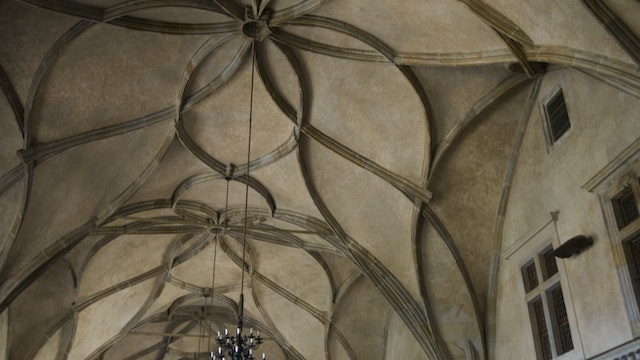 The Old Royal Palace is one of the oldest parts of Prague Castle, dating from 1135. It was originally used only by Czech princesses, but from the 13th to the 16th centuries it was the king’s own palace. At its heart is the grand Vladislav Hall and the Bohemian Chancellery, scene of the famous Defenestration of Prague in 1618.

The Vladislav Hall (Vladislavský sál) is famous for its beautiful, late-Gothic vaulted ceiling (1493–1502) designed by Benedikt Rejt. Though around 500 years old, the flowing, interwoven lines of the vaults have an almost art-nouveau feel, in contrast to the rectilinear form of the Renaissance windows. The vast hall was used for banquets, councils and coronations, and for indoor jousting tournaments – hence the Riders’ Staircase (Jezdecké schody) on the northern side, designed to admit a knight on horseback. All the presidents of the republic have been sworn in here.

A door in the hall’s southwestern corner leads to the former offices of the Bohemian Chancellery (České kanceláře). On 23 May 1618, in the second room, Protestant nobles rebelling against the Bohemian estates and the Habsburg emperor threw two of his councillors and their secretary out of the window. They survived, as their fall was broken by the dung-filled moat, but this Second Defenestration of Prague sparked the Thirty Years’ War.

At the eastern end of the Vladislav Hall, a door to the right leads you to a terrace with great views of the city. To the right of the Riders’ Staircase you’ll spot an unusual Renaissance doorway framed by twisted columns, which leads to the Diet (Sněmovna), or Assembly Hall, which displays another beautifully vaulted ceiling. To the left, a spiral staircase leads you to the New Land Rolls Room (Říšská dvorská kancelář), the old repository for land titles, where the walls are covered with the clerks’ coats of arms.