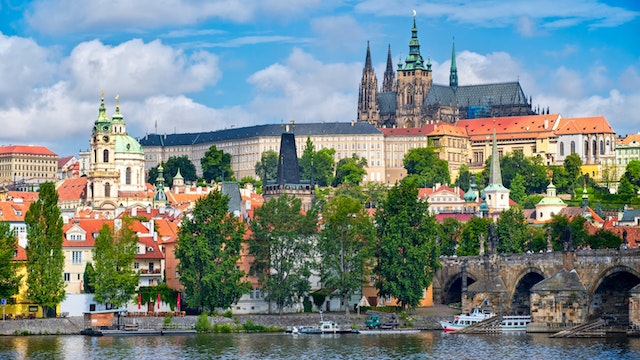 Prague’s most popular attraction. Looming above the Vltava's left bank, its serried ranks of spires, towers and palaces dominate the city centre like a fairy-tale fortress. Within its walls lies a varied and fascinating collection of historic buildings, museums and galleries that are home to some of Czechia's greatest artistic and cultural treasures. Note that visitors must pass through a security check before entering the grounds, so bring your passport or EU identification card.

The castle has always been the seat of Czech monarchs, as well as the official residence of the head of state. Its history began in the 9th century, when Prince Bořivoj founded a fortified settlement here. It grew haphazardly as rulers made their own additions – there have been four major reconstructions, from that of Prince Soběslav in the 12th century to a classical facelift under Empress Maria Theresa (r 1740–80) – creating an eclectic mixture of architectural styles.

There are three main kinds of tickets (A, B, C; each valid for two days), which allow entry to different combinations of sights. Most visitors will be satisfied with the reduced-price option B, which includes the major highlights. You can buy tickets and hire English-language audio guides (350Kč) at either of two information centres in the Second and Third Courtyards, or from ticket offices at the entrances to all the main sights.