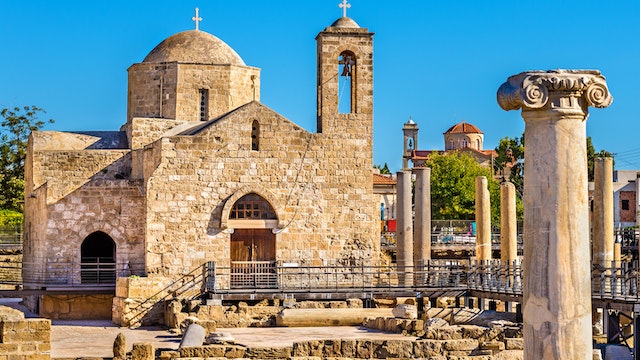 This fascinating site was home to one of Pafos’ largest religious structures. What remains are the foundations of a 4th-century Christian basilica, which aptly demonstrates the size and magnificence of the original church, destroyed during Arab raids in 653. Several magnificent marble columns remain from the colonnades, while others lie scattered around the site, and mosaics are still visible.

Further incarnations of the basilica were built over the years, leading to the present small Agia Kyriaki church, which is now used for Anglican, Lutheran and Greek Orthodox services.

A raised walkway provides excellent views of the extensive site and has explanatory plaques in English. Look also for the tomb of Eric Ejegod, the 12th-century king of Denmark who died suddenly in 1103 on his way to the Holy Land.

On the western side of the basilica is the so-called St Paul’s Pillar, where St Paul was allegedly tied and scourged 39 times before he finally converted his tormentor, the Roman governor Sergius Paulus, to Christianity.