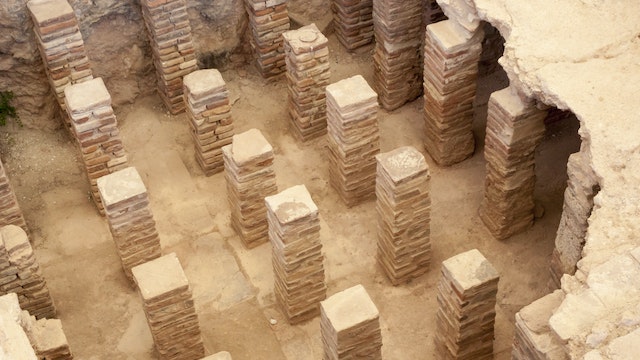 Defiantly perched on a hillside, with a sweeping view of the surrounding patchwork fields and the sea, Ancient Kourion is a spectacular site. Most likely founded in neolithic times due to its strategic position high on a bluff, it became a permanent settlement in about the 13th century BC, when Mycenaean colonisers established themselves here.

There’s a small visitors centre where you can see a scale model of the whole site, which will help orientate your visit.

The ticket office is at the entry gate halfway up the hill. From there the road continues to the hilltop to the visitor’s centre and ruins.

The settlement prospered under the Ptolemies and Romans, and a pre-Christian cult of Apollo was active among the inhabitants of Kourion in Roman times, as evidenced by the nearby Sanctuary of Apollon Ylatis. Christianity eventually supplanted Apollo and, despite disastrous earthquakes in the region, an early Christian basilica was built in the 5th century, testifying to the ongoing influence of the religion on Kourion by this time.

Pirate raids 200 years later severely compromised the viability of the Christian bishopric; the Bishop of Kourion was obliged to move his base to a new settlement at nearby Episkopi (meaning ‘bishopric’ in Greek). Kourion declined as a settlement from that point on and was not rediscovered until tentative excavations at the site began in 1876.

The early Christian basilica at Ancient Kourion displays all the hallmarks of an early church, with foundations clearly showing the existence of a narthex diakonikon (a storage area for agricultural products used by priests and monks), various rooms, a baptistery and an atrium. Some floor mosaics are also visible among the remains.

Originally a palace dating from the early Roman period, this complex was subsequently altered in the 3rd century AD and made a more communal space for the local residents, with the addition of extensive baths, courtyards and halls. Its colourful Christian-influenced mosaic floors are well preserved and make a mention of the builder, Eustolius, and the decidedly non-Christian patron, Apollo. Look for Christian motifs of cross-shaped ornaments and fish.

House of the Gladiators

At the northwestern edge of the Ancient Kourion site you come to the House of the Gladiators, so called because of two fairly well preserved floor mosaics depicting gladiators in combat dress. Two of these gladiators, Hellenikos and Margaritis, are shown practising with weapons.

Just to the north is the House of Achilles, where a fragment of a beautifully intricate floor mosaic depicting Achilles meeting with Odysseus has survived.

The ruins of Hellenistic and Roman Kourion lie on the northern plateau of the Ancient Kourion site. The Roman agora and the stoa, with its colonnade of 16 marble columns, sit alongside the early Christian basilica.

Just to the north, a wooden walkway leads you over the substantial remnants of the Roman city baths, an irrigation system and the nymphaeum. The foundations of the public baths, with the layout of the frigidarium (cold room), tepidarium (warm room) and caldarium (hot room), can still be clearly seen.

More interesting for its lovely coastal views than for its actual structure, Ancient Kourion’s Roman Theatre is a reconstruction of a smaller theatre that existed on the same spectacular site, high on the hill overlooking the sea, which was destroyed by earthquakes in the 4th century. Nevertheless, it gives a good idea of how the original would have been at its peak. Today the theatre is often used for cultural events and performances by Cypriot and visiting Greek singers and bands.